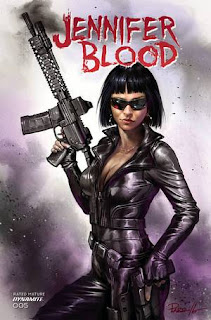 Jennifer Blood is a a comic book character created by writer Garth Ennis and artist Adriano Batista.  A suburban wife and mother by day, Jennifer Blood is a ruthless vigilante by night.  Born “Jessica Blute,” she took her mother's first name, Jennifer, and created the alter ego, “Jennifer Blood, and sought revenge against her father's family for the death of her parents.  The first Jennifer Blood comic book series ran for 36 issues from 2011 to 2014.

Jennifer Blood returns from the dead in a new comic book series, Jennifer Blood Volume 2.  It is written by Fred Van Lente; drawn by Vincenzo Federici; colored by Dearbhla Kelly and lettered by Simon Bowland and Jeff Eckleberry.  In the new series, someone is acting like Jennifer Blood, who is supposedly dead.  And this “copycat” loves to kill criminals just like the original did.  Her killing ground is Bountiful, Utah – a town run by and for criminals.  Bountiful (population 4302 ) is where the U.S. Department of Justice sends the most infamous East Coast mobsters into the federal “Witness Protection Program” (WPP).

Jennifer Blood Volume 2 #5 (“There Goes the Neighborhood”) opens in Bountiful in the wake of the slaughter of FBI agents in Salt Lake City.  They were the agents that were responsible for overseeing Bountiful.  There killer?  Jennifer Blood!  Or maybe not.

Alphonso “Don” Giallo – the former overboss of Newark, NJ who is now the boss of Bountiful – believes that the true killer is Giulietta Romeo, the top assassin for the Neopolitan Camorra.  Giallo brought her to Bountiful to hunt Jennifer Blood, and he made her Sheriff Giulietta.  Now, thanks to some video evidence, the don thinks his hired assassin is the killer she was hired to take out.

On the other hand, Giulietta believes that she has solved the mystery of Jennifer Blood's identity.  The real question is can she live long enough to prove her theory?

THE LOWDOWN:  In July 2021, Dynamite Entertainment's marketing department began providing me with PDF review copies of some of their titles.  One of them is Jennifer Blood Volume 2 #5.  This is the fifth Jennifer Blood comic book I have read, although I had previously heard of the series.

Unfortunately, Jennifer Blood Volume 2 #5 is the final issue of this current series.  I say “unfortunately” because the series got better with each issue.  After reading the first issue, I wasn't sure if I would like Jennifer Blood Volume 2 over its entirety.  However, writer Fred Van Lente always offered something new and made each issue seem better than the previous.  He made reading about Jennifer Blood killing a lot of people every issue fun to read, and in Giulietta Romeo, he had a great secondary lead and foil

The art and storytelling by Vincenzo Federici perfectly fit Van Lente's depraved comic tone and madcap violence, and the colors by Dearbhla Kelly were the perfect accompaniment with its spurts of blood.  And throughout, Simon Bowland and Jeff Eckleberry's lettering was the soundtrack of sacrifice to mob violence and bloody revenge.

If you haven't read it yet, and you like comic books like The Punisher, then, Jennifer Blood Volume 2 is for you, dear readers.  In the meantime, I will hope that we get a third volume of this fun craziness.


The text is copyright © 2022 Leroy Douresseaux. All Rights Reserved. Contact this blog or site for reprint and syndication rights and fees.
------------------
Amazon wants me to inform you that the link below is a PAID AD, but I technically only get paid (eventually) if you click on the ad below AND buy something(s).
Posted by Leroy Douresseaux at 4:47 PM