Comics Review: "VAMPIRELLA Valentine's Day Special" is Like a Box of Chocolates 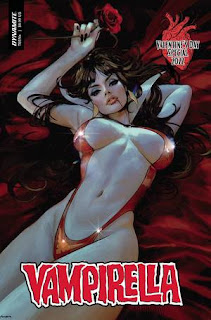 In 2010, Dynamite Entertainment obtained the character and has been publishing new Vampirella material since then.  The latest is Vampirella Valentine's Day Special, an anthology comic book comprised of four stories.

THE LOWDOWN:  I will summarize and review each story separately:

“A Dame with Fangs” by David Avallone, Vincenzo Carratu, Ellie Wright, and Jeff Eckleberry:
On February 14, 1972 – Valentine's Day – Nick Napoli, a 20-year-old Vietnam combat veteran turned New York City police officer, has the shock of his life.  He is attacked by one vampire and then, meets another, Vampirella.  It turns out to be an unforgettable experience...

“A Dame with Fangs” is a sweet little tale that is sentimental in all the right ways without being sickly sweet and cloying.  I wonder if writer David Avallone is essentially offering a valentine card to his late father, Michael Avallone, who was a World War II veteran and a prolific author.  Many of his novels starred private investigators who dealt with unusual and unusually sexy women.

“A Match Made in Hell” by George Kambadais and Jeff Eckleberry:
Vampirella takes on a fire monster, but when she thinks she has found a solution, things get complicated.  Well, it is Valentine's Day!

Cute story, cute art, cute coloring, and cute lettering:  “A Match Made in Hell” is a delightful piece of candy in this box of chocolates.

“Outlaws”by Jacob Edgar, Andres Labrada, Ellie Wright, and Jeff Eckleberry:
Rhett Nelson and Besty Louisa Farrell are in love and also outlaws on the run.  Then, things turn so bad that they have to turn to mystery woman, “Miss Normandy,” but will they get the help they want?

Well, I suppose that every Valentine's Day-theme anthology needs a tale of doomed love.  “Outlaws” makes good use of Vampirella, and this could also work as a longer story.

“O Glorious Saint Valentine” by Dearbhla Kelly, George Kambadais & Emiliana Pinna, and Jeff Eckleberry:
Vampirella has some business in Phoenix Park, Dublin.  It seems that the “Dearg-Due,” the ghost of a wronged maiden, is killing the lovelorn.  Vampirella isn't sure how to destroy a ghost, and she may also not be any good in matters of the heart.

What would a Vampirella anthology, even a Valentine's one, be without a ghost story?  “O Glorious Saint Valentine” is also a nice example of how complicated love with a human can be for Vampirella.

Usually when I review an anthology comic book, I pick a favorite story.  Well, I like all four stories in Vampirella Valentine's Day Special, and I highly recommend that you give them all a try.  Also, I think all four stories could work as a longer narrative.

I READS YOU RECOMMENDS:  Fans of Vampirella comics will want to read Vampirella Valentine's Day Special.