Comics Review: "Nyx #4" is Another Good Issue in a Really Good Series 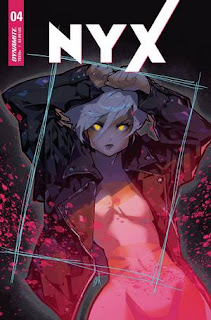 As Nyx #4 (“Deranged Tales”) opens, Nyx is at “St. John's Occult Emporium.”  There, she hopes that the proprietor, St. John, a human sorcerer, will remove her human side – with the help of the powerful occult book, “The Crimson Chronicles.”  But, of course, the eager St. John has plans of his own.

Also, Nyx meets her first Pendragon.  Yes, it's Victoria Pendragon, the great-granddaughter of “Pendragon the Great,” Vampirella's old partner in a stage act.  Victoria is also a hunter of monsters and demons, so does Nyx fit that description?

THE LOWDOWN:  In July 2021, Dynamite Entertainment's marketing department began providing me with PDF review copies of some of their titles.  One of them is Nyx #4, the fourth issue of the series that I have read.

Christos Gage has made Nyx a thoroughly enjoyable comic book to read.  It has lots of dark fantasy action-violence, for those who need that, but the comic book is also more than that.  It seems like a narrative about relationships and about characters getting to know one another, with a mixture of fantasy and comedy.  I find myself interested in learning more about both Nyx and whichever guest pops up in a particular issue.

Marc Borstel's art and Jordi Escuin Llorach's colors strike the perfect storytelling tone for both the series' fantasy elements and for the character drama.  The art is clear and emotive, and the colors make the story hum with magic and feeling.  I implore you, dear readers, to read Nyx.

Posted by Leroy Douresseaux at 11:34 AM