Comics Review: "NIGHT OF THE GHOUL #3" Welcomes the "Gul" 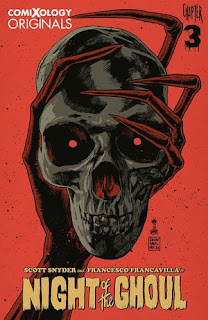 NIGHT OF THE GHOUL #3 (OF 6)
comiXology/Best Jacket Press

As Night of the Ghoul #3 opens, Dr. Skeen, head of the facility, interrupts Forest's interview with Merritt.  Skeen also rebuffs Orson's story about the corpses of children being in the facility.  Father and son depart the facility and during an argument, Orson reveals some surprising news about his mother, Forest's wife.  It all leads to Forest witnessing something shocking.

Meanwhile, inside the film, “Night of the Ghoul,” Alex and Johnny Polaris continue their investigation into the Ghoul.  Alex is the son of Sgt. Kurt Powell of Eagle Company, and Polaris, Powell's friend and fellow veteran of World War I, was also in the Eagle Company.  They believe that Kurt became infected with the Ghoul during a secret mission in Italy during the war.

Alex and Polaris meet Dale Holloway, a professor of Anthropological Studies.  She once researched “Gul” legends, and she actually tried to find the Ghoul.  The result is that she has terrible story to tell.

THE LOWDOWN:  In Night of the Ghoul, Francavilla and Snyder have created a masterpiece of atmospheric horror.  I can never get enough of this visually splendid comic book.

In Episode 3, Snyder ups the ante by revealing more about the precarious state of Forest Innman's marriage and his frayed relationship.  Inside the Night of the Ghoul film, Francavilla presents beautiful graphic design, especially in the “Gul” artifacts.  The artist also creates an appropriately chilly atmosphere for Prof. Holloway's tale.

Posted by Leroy Douresseaux at 2:21 PM