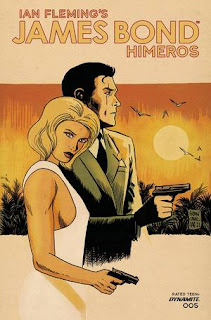 Over the past 50+ years, Bond has made sporadic appearances in comic books, but Dynamite Entertainment has been steadily publishing James Bond comic books since early 2016.  Their latest James Bond comic book is James Bond: Himeros.  It is written by Rodney Barnes; drawn alternately by Antonio Ruso, Pierluigi Minotti, and Giorgio Pontrelli; colored by Adriano Augusto; and lettered by Social Myth Studios.  In Himeros, 007's struggles to save a woman from Anton Bates, a military arms dealer who wants to keep secret his connections to billionaire financier and notorious sex trafficker, the late Richard Wilhelm, from coming to light.

James Bond: Himeros #5 opens on Wilhelm's island.  There, Bond makes his last stand to protect Sarah Richmond, Wilhelm's right hand man and keeper of his secrets.  That means taking on Bates' assassin, Kino.  Bond knows that by the end of this, not everyone is walking away with their lives.

THE LOWDOWN:  In July 2021, Dynamite Entertainment's marketing department began providing me with PDF review copies of some of their titles.  One of them is James Bond: Himeros #5, which is one of several Dynamite James Bond comic books I've read.

James Bond: Himeros #5 is the final issue of the series, and writer Rodney Barnes offers an ending so explosive that it might … blow your minds.  Barnes' certainly ends Himeros better than No Time to Die ended actor Daniel Craig's run as movies James Bond.  Still, readers may find Barnes' take on Bond to be as tough as thuggish as Craig's.

Giorgio Pontrelli proves to be the best of the three artists that drew this series.  Pontrelli draws this final chapter in widescreen which gives the story a cinematic effect, and the art makes Barnes' story hit with two-fisted authority.

Posted by Leroy Douresseaux at 4:41 PM