Review: Albert Finney and a Star-Studded Cast Power 1974 "Murder on the Orient Express" 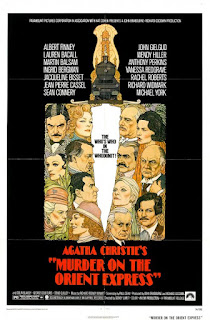 Murder on the Orient Express finds acclaimed detective, Hercule Poirot (Albert Finney), ready to board the transcontinental luxury train, “the Orient Express,” in December 1935.  Having solved a case for a British Army garrison in Jordan, he is due to travel to London on the Orient Express from Istanbul.  There, he encounters his old friend, Signor Bianchi (Martin Balsam), a director of the company which owns the line.

There are other notable passengers traveling in the same coach as Poirot and Bianchi.  There is the assertive and talkative American widow, Harriet Belinda Hubbard (Lauren Bacall).  The quiet English governess, Mary Debenham (Vanessa Redgrave), and Colonel John Arbuthnott (Sean Connery) of the British Indian Army have apparently struck up a relationship.  Swedish missionary, Greta Ohlsson (Ingrid Bergman), is on a trip to raise charity funds so that she can continue to take care of “little brown babies.”  American businessman Samuel Ratchett (Richard Widmark), is on a business trip with with his secretary/translator, Hector McQueen (Anthony Perkins), and his English valet, Edward Beddoes (John Gielgud).

On the second morning of the journey, Samuel Ratchett is found dead.  Signor Bianchi asks the esteemed Monsieur Poirot if he can discover the identity of the murder before the train arrives in Brod, where the Yugoslavian police will take over the investigation.  With the assistance of Bianchi and the Greek physician, Dr. Constantine (George Coulouris), Poirot discovers that the victim was stabbed 12 times.  Now, he must investigate 13 suspects.  Who has committed this murder?  Who is lying?  Where is the truth?  And what is the real story behind the mysterious American who is the victim?  Poirot must discover the answers before the murderer strikes again aboard a train that becomes snowbound.

Agatha Christie died about 14 months after the release of Murder on the Orient Express.  Apparently, this film and Witness for the Prosecution were the only movie adaptations of her books that she liked.  She was also apparently pleased with Albert Finney's performance as Hercule Poirot.

The primary treat of Murder on the Orient Express is its star-studded cast, led by Albert Finney, who earned a “Best Actor” Oscar nomination for his performance.  Ingrid Bergman won the “Best Supporting Actress” Oscar for her role as Greta Ohlsson, a performance that is so immersed in technical detail that it seems more fitting for some high-minded, serious dramatic film.  In general, the women here give strong performances in character roles.  Wendy Hiller is a delight as Princess Natalia Dragomiroff, and Lauren Bacall chews up the scenery as the assertive and talkative Mrs. Hubbard.

The cast of this film is comprised of the some of the biggest movie stars of the middle twentieth century.  Some were not known for playing character roles, but in Murder on the Orient Express, they flexed their character acting chops.  The result of these star performances is a hugely entertaining whodunit with a shocking murder and plenty of terrific intrigue.

I thoroughly enjoyed this film, and although I was initially put off by Albert Finney as Poirot, I soon found myself unable to stop watching him.  Yes, 1974 Murder on the Orient Express shows its age, but fans of whodunits, of Agatha Christie, of murder mystery films will want to see this film.

Posted by Leroy Douresseaux at 12:00 PM