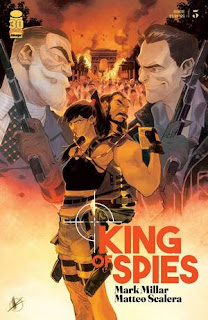 KING OF SPIES #3 (OF 4)
IMAGE COMICS/Netflix

King of Spies is a four-issue miniseries created and written by Mark Millar.  It focuses on the world's greatest secret agent who has six months to live and won't die quietly in a hospital bed.  Published by Image Comics, King of Spies is drawn by Matteo Scalera; colored by Giovanna Niro; and lettered by Clem Robins.

British secret agent, Roland King, is 65-years-old and has just been diagnosed with Glioblastoma, the most aggressive from of brain cancer.  Facing an unusual, mid-life turned end-of-life crisis, King decides to go to war with the very system that he propped up for 40 years.  Kings, presidents, crooks, and the greedy pigs who treat everything like their personal troughs: King is coming for you.

King of Spies #2 opens in Vatican City.  Guess who is on Roland's shit list tonight.  Guess why he's on that list.  Several killings later, Roland is in Paris where he gets a surprise.  His estranged son, Atticus King, has answered the “Code Black” to kill Roland and is leading a team of mercenaries out to put Roland down once and for all.  That includes the team of Itzy, who does not have her arms, and Idris, who does not have his bottom half, because of Roland.

Roland's killing spree has taken him to the one opponent he can never beat.  With his health declining and his body starting to fail him, does Roland still has one more trick up his sleeve?

THE LOWDOWN:  King of Spies is the fifth original comic book property that Mark Millar has created for Netflix since the media giant bought his comic book company, “Millarworld,” in 2017.  King of Spies is Millar's second comic book set in the world of secret agents, following the Kingsman series that began in 2012 with the miniseries, The Secret Service.

Thanks to artist Matteo Scalera's supremely skillful graphical storytelling and brilliantly designed compositions and pages, King of Spies may be the best action movie of 2022, so far.  King of Spies #3 certainly moves better than most of the dead-on-arrival movies of the last two years that pretended to be action movies.

Giovanna Niro's colors and Clem Robins letters are sinfully good.  Niro's colors would have to be to match Scalera's sold-his-soul-to-draw-like-that art.  Robins must certainly have a stout heart to letter the outright blasphemy that is the first six pages of King of Spies #3.  Well, somebody had to depict such a scene in comic books, so it had to be the mad genius Mark Millar.

Posted by Leroy Douresseaux at 5:13 AM