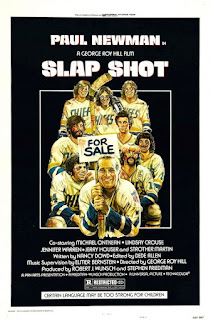 Slap Shot is a 1977 sports comedy-drama film directed by George Roy Hill and starring Paul Newman.  The film focuses on a hockey coach and his minor league ice hockey team that finds success when they turn to violence in order to gain popularity in their hometown.

Slap Shot opens in the (fictional) New England small town of Charlestown.  The town's main business, the local mill, is about to lay off 10,000 workers.  That threatens the existence of the town's minor league hockey team, the Charlestown Chiefs, which is struggling with a losing season.  The hometown crowd is increasingly hostile, and the team's general manager, Joe McGrath (Strother Martin), is looking for another job, that is when he isn't trying to sell off team equipment.

After discovering that the team's ownership is going to fold the team, player-coach Reggie Dunlop (Paul Newman) concocts a plan to save the team and his job.  He tells his players that the team is going to be sold to a buyer in Florida, but in order to make the team attractive, they have to win and draw larger crowds.  Reggie encourages the recently acquired Hanson Brothers:  Steve (Steve Carlson), Jack (David Hanson), and Jeff (Jeff Carlson) to engage in the violent play they enjoy so much.  The brothers' aggressive violence and thuggish style of play excites the fans, so Reggie retools the team, encouraging his players to act like “goons.”  Soon, the team is actually winning games, and the victories and violence draw big crowds at home and on the road.  But how long can Reggie keep hiding the truth?

I had been putting off seeing Slap Shot for years, but recently, I got to see part of it on one of those retro Cinemax/Flix cable channels.  I couldn't believe how much I liked what I saw, so I decided to watch the entire movie.  Thanks to DVD.com (Netflix), I was able to do so.

It was worth it.  I'm not a big fan of sports movies, and I am quite particular about the ones I watch.  I thoroughly enjoyed Slap Shot, in large part because I am a fan of the late actor, Paul Newman (1925-2008).  Slap Shot is an odd movie, but in many ways it is a Paul Newman movie.

Yes, the elements of Slap Shot that involve minor league hockey:  struggling clubs, small town hockey fans, inconsiderate management and uncaring ownership, and professional hockey players on the less glamorous side of a professional career feel genuine.  There are times while watching this movie that I could believe that the Charlestown Chiefs were a real down-and-out minor league hockey team.  The small town setting seems authentic.  The supporting characters are quite interesting, and not just the now-legendary, delightful, and lovable Hanson Brothers.  Players like the wide-eyed Dave “Killer” Carlson (Jerry Houser) and the lascivious Morris "Mo" Wanchuk (Brad Sullivan) add color, spice, and edgy humor to Slap Shot.

However, Slap Shot is a Paul Newman movie.  The movie strikes a wonderfully odd tone, in large part because of the shifting tones of Newman's deft comic performance.  Reggie Dunlop is essentially having a midlife crisis, as he is about to lose the one and only thing he has in life – playing hockey.  It is certainly the thing he loves the most, and he clearly would not give it up in order to hold onto his wife, Francine Dunlop (Jennifer Warren).  Newman deftly navigates the shifting tones of Slap Shot – from riotous sports comedy to quirky character comedy-drama.  With a sly grin and roguish charm, Paul Newman's acting talent and star power carry Slap Shot through its inconsistencies and lapses in logic.  And when none of that works, Newman's lovely blue eyes step in to save the day.

Although it apparently was only a moderate box office success upon its first release, Slap Shot is one of those film that has gained new generations of fans through showings on cable television and home entertainment releases like VHS, DVD, and Blu-ray.  I hope it continues to find new fans because there is nothing else like it and because we should never forget Paul Newman.  Slap Shot is both unique and uniquely entertaining … and it has the Hanson Brothers, of course.