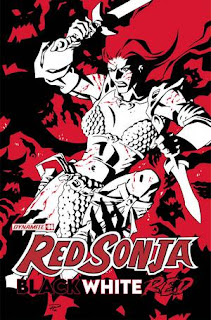 THE LOWDOWN:   In July 2021, Dynamite Entertainment's marketing department began providing me with PDF review copies of some of their titles.  One of them is Red Sonja Black White and Red #7, which is the sixth issue of the title that I have read.

“Blood on Snow” by Ron Marz, Mirko Colak,  Kike J. Diaz, and Jeff Eckleberry:
The story opens in snowy Nordheim.  Wounded, Red Sonja finds herself pursued by the men of the chieftain she just killed.  The She-Devil with a Sword takes shelter in an ancient temple.  Now, the two sides face off, but whose blood will stain the snow?

“Blood on Snow” is a classic Red Sonja tale pitting her against men with murder on their minds.  The story has a cool monster twist, and it is effectively done with nice art by Mirko Colak.  Also, this could be a classic Conan tale.

“Unbowed” by Phil Hester, Heidi Blair, and Jeff Eckleberry:
Red Sonja has a mission – return the body of a former teacher to the convent they both once called home.  The path she takes brings her into conflict with the “Wolf Clan.”  Can Red Sonja make it?  Is the She-Devil with a Sword like her late teacher, unbowed?

“Unbowed” is one of the best stories I have read in this anthology series.  Heidi Blair's art captures the subtly poignant mood that Phil Hester gives this story.  However, don't think for a minute that “Unbowed” lacks hacking and slashing.  It is simply that the drama here is so strong.

“Sonja's Gambit” by Amy Chu, Andres Labrada, and Jeff Eckleberry:
The story opens somewhere near the southern border Hyrkania.  Thamyris, a queen, traps Sonja in a magical game of chess.  Unfamiliar with the game, Sonja must make a gambit...

I like Andres Labrada's art in this story, and although “Sonja's Gambit” isn't a great Red Sonja tale, it is a nice little magical story.

It is hard for me to pick a favorite story from the offerings in Red Sonja Black White and Red #7.  I'll go with “Unbowed,” although “Blood on Snow” is a close second.

Posted by Leroy Douresseaux at 2:11 PM