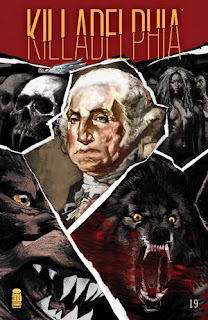 “The End of All” Part I: “Hope Springs Eternal”

Killadelphia focuses on James “Jim” Sangster, Jr. and his father, revered Philadelphia homicide detective, James Sangster, Sr., thought to be dead.  He is actually a vampire.  Now father and son lead a ragtag team comprised of a medical examiner, a dead president, and a rebellious, but special young vampire (Tevin Thompkins a.k.a. “See Saw”) in a bid to save Philly from an ambitious and murderous former First Lady, Abigail Adams.

As Killadelphia #19 (“Hope Springs Eternal”) opens, Jim Sr. and his allies make their final stand against Abigail Adams.  She is already in the process of dispatching her husband, John Adams, the second President of the United States and a vampire.

Sangster needs allies.  Enter the werewolves of Elysium Gardens.  Abigail also has new allies, including the necromancer Thomas Jefferson!  Will the demons unearthed from America's past threaten the existence of Philadelphia and of the world as we know it?

THE LOWDOWN:  Killadelphia's fourth story arc, “The End of All,” begins.  It is being described as a turning point in the series.

The truth is that most issues of Killadelphia are turning points in the narrative.  Writer Rodney Barnes continues to expand this series beyond – way beyond – its initial description as a vampire comic book.  The characters are rich and complex, and the fact that the characters are who they are … well, it is bold and visionary.  After all, the so-called “Founding Fathers” of the United States were always vampires, so Killadelphia is telling you the truth.  Seriously, just about every issue has something new, sometimes something unseen in mainstream comic books.  Thus, Killadelphia is about changing and turning, transforming the predictable into the unexpected.

Welcome back, Killadelphia.  And dear readers, you don't need to have read the previous issues to enjoy Killadelphia #19.

Reviewed by Leroy Douresseaux a.k.a. "I Read You"

Posted by Leroy Douresseaux at 4:11 AM