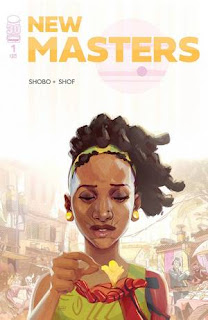 New Masters is a new six-issue miniseries from brothers, writer Shobo Coker and artist Shof Coker.  New Masters is set in a version of West Africa that is under the control of alien invaders, particularly the Jovians.  The series focuses on a band of misfits and outcasts who become caught up in the struggle to control an immensely powerful ancient artifact that could rid Earth of its alien colonizers.

New Masters #1 opens in the distant future.  In the early part of the twenty-first century, the “Jovian Naviculae” slammed into Earth, spreading exotic fuels and destroying many great cities.  A thousand years later, deep in the Eko Exclusion Zone (E-Zone), a young female scavenger, Ola, hunts for a cache of Obsidium, an alien mineral.  Elsewhere, in the sinking slums of Makoko on the coast of Eko City, a couple offers the suffering residents a device that could change their lives.  Meanwhile, a high-ranking politician and her alien lover discuss The Eye of Òrùnmìlá, an ancient alien artifact that could change the fate of Earth.

THE LOWDOWN:  The wider interest in Afrofuturism, a cultural aesthetic and philosophy about the intersection of Africa, the Diaspora, the future, and technology, has been increasing for some time.  For some, their most memorable experience with Afrofuturism is the 2018 Disney/Marvel Studios film, Black Panther.  Perhaps, one of the most prominent expressions of Afrofuturism in comic books is LaGuardia (Dark Horse Comics/Berger Books), the 2019, award-winning miniseries from writer Nnedi Okorafor and artist Tana Ford.

New Masters shares a few ideas with LaGuardia.  All of it infused with (as the creators say) “...African experience, philosophy, and culture...”  I suspect that many American comic book readers will find New Masters exotic because so many of them have been exposed to science fiction that is White male, White American, and White people in general.  For some of them, anything with more than two characters that are Black, Indigenous, or people of color (BIPOC) must seem like a comic from another land or an foreign artifact of some kind.

As my tastes are varied and diverse, New Masters seems only a little exotic to me, but some of it feels quite familiar.  To me, some of it looks like the wild and weird alien futures that readers could find in an issue of the seminal science fiction comics magazine, Heavy Metal.  In fact, Shof's art and colors, in terms of visuals and narrative, remind me of the work of the late French comics master, Moebius.  Overall, the visuals and the narratives of New Masters is familiar from old masters.

Shobo Coker & Shof Coker spend New Masters #1 introducing characters and settings, giving tastes of the story's overall plot and subplots.  There is a lot to take in, and so much of it piques my interest.  Truthfully, I think that this first issue would have been better served as a double-sized first issue.  The 32 pages of narrative that comprises this first issue is strained to bursting with all the beautiful story elements contained inside the covers.

New Masters #1 intrigues me too much not to come back again, and it is so fresh and inviting.  New Masters could be something special and could inject what American comic books really needs – actual new creative blood.

I READS YOU RECOMMENDS:  Fans of science fiction comic books and of Afrofuturist fiction will want to read New Masters.

Posted by Leroy Douresseaux at 1:59 PM