Review: "HALLOWEEN KILLS" is the Best "Halloween" Sequel in Decades 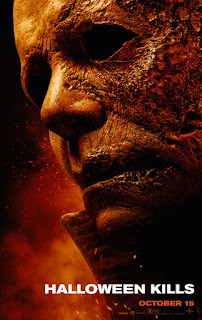 Halloween Kills is a 2021 slasher-horror film from director David Gordon Green.  It is the twelfth installment in the Halloween film series and is a direct sequel to the 2018 film, Halloween, and to the original Halloween, the 1978 film that was the first in the series.

Halloween Kills opens on October 31, 1978 in Haddonfield just after the events depicted in the original Halloween (1978) film.  Michael Myers failed to kill Laurie Strode, but he survived being shot by Dr. Samuel Loomis.  Now, the sheriff's department is desperately searching for Michael.  While searching for him in the ruins of his childhood home, Deputy Frank Hawkins (Thomas Mann) accidentally shoots his partner, Peter McCabe (Jim Cummings), dead while trying to save him from Michael.  Hawkins also prevents Dr. Loomis from executing Michael.

Forty years later, on October 31, 2018, Laurie Strode (Jamie Lee Curtis); her adult daughter, Karen Nelson (Judy Greer), and Karen's daughter, Allyson (Andi Matichak), have escaped Laurie's fortified house.  They believe that they have defeated Michael Myers who had returned to do what he had not forty years earlier – kill Laurie Strode.  They believe that Michael will die in Laurie's now-burning house, even as they see firefighters responding to the blaze.

While the medical staff of Haddonfield Memorial Hospital try to save the badly injured Laurie's life, survivors of Michael original rampage celebrate the 40th anniversary of Michael's imprisonment.  Two of them are the adult Tommy Doyle (Michael Anthony Hall) and the adult Lindsey Wallace (Kyle Richards), the two children Laurie Strode was babysitting back in 1978 the night Michael attacked.   When Tommy learns that Michael Myers has returned to Haddonfield, Tommy forms an every-growing mob of vengeful Haddonfield residents to hunt down and kill Michael.  Meanwhile, back at the hospital, Laurie and an older Deputy Frank Hawkins (Will Patton) wonder if Michael can really every be stopped.

Halloween Kills is the sequel to Halloween 2018, which is both a direct sequel to Halloween 1978 and a reboot of the entire franchise.  Halloween 2018 literally made all the sequel films to the 1978 film irrelevant.  Halloween Kills, however, takes elements from one of those sequels, the excellent Halloween II (1980), and rewrites them to explain what happened to Michael immediately after the events of the 1978 film.  In Halloween II, Michael escapes the police and stalks Laurie to Haddonfield Memorial Hospital.  In Halloween Kills, the sheriff and his deputies and Dr. Loomis capture Michael before he ever makes his way to the hospital to attack Laurie again.

In fact, Halloween Kills pretty much keeps the now-elderly Laurie Strode in the hospital and out of the fight this time around.  Halloween Kills is the first Halloween film that pits Michael Myers against the residents of Haddonfield rather than having him stalk Laurie Strode, a version of her, or a descendant, while killing anyone who happens to be connected directly or indirectly to his target.

I like that.  It refreshes the franchise in a way that Halloween 2018 did not.  Halloween Kills is honest, in a way.  Michael Myers won't be killed off because, as a movie character and as intellectual property, he is a cash cow.  In the world of the film, Michael suffered injuries in Halloween 1978 and 2018 that should have caused his death.  The very nature of his violence creates the atmosphere and conditions that keep him alive and returning to kill more.  Michael can't be killed, even in the world of these films.

I like Halloween Kills much more than I liked Halloween 2018.  The inventive script and David Gordon Green's aggressive and confrontational directing style result in two good things.  First, the actors' performances are individualized, so no one is the same.  Thus, when Michael kills a character, it feels like he is killing a real resident of Haddonfield rather than a generic victim in a horror film's typically high body count.  Let's be honest, dear readers, the main problem with the Friday the 13th horror film franchise is that the vast majority of the victims seem like the same people.

Secondly, Green and company offer some of the most creatively brutal kills that the audience will find in a slasher horror film.  No one killing is the same, and they all seem well thought out even when they happen quickly.  I really enjoyed Halloween Kills, and several times, I caught myself cheering and whooping it up.  I will say that Halloween Kills is a near-masterpiece of the genre, and it is a more worthy successor to Halloween 1978 that Halloween 2018 is.


The text is copyright © 2022 Leroy Douresseaux. All Rights Reserved. Contact this blog or site for reprint syndication rights and fees.
-----------------------
Amazon wants me to inform you that the link below is a PAID AD, but I technically only get paid (eventually) if you click on the ad below AND buy something(s).
Posted by Leroy Douresseaux at 2:34 AM