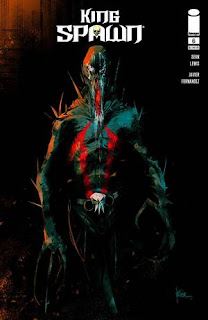 A year ago, (February 2021), Todd McFarlane announced his plans to build a larger, multi-character, interconnected, comic book universe based around his Spawn comic book – a “Spawn Universe.”  McFarlane also announced four new comic book titles coming out in 2021, with three of them continuing as regular monthly titles.

One of them is King Spawn.  This series is written by Sean Lewis; drawn by Javi Fernandez; colored by FCO Plascencia; lettered by Andworld Design.  King Spawn finds Spawn battling the members of a dark conspiracy that wants to force him to accept his crown.

King Spawn #6 opens after the shocking revelation that the “Disruptor” is Jason Wynn, the late director of the U.S. Security Group … and Al Simmons' former boss … who betrayed him.  Wynn wants Spawn to open the “Dead Zones” and to embrace his destiny as “King Spawn.”

Spawn simply wants to remember the wrongs everyone has done to him … all of them.  Meanwhile, another secretive organization prepares for Spawn's fate.

THE LOWDOWN:  King Spawn continues to be the best Spawn spin-off comic book to date.  It is so fun to read; nothing against other comic books in the Spawn line, but King Spawn is … king.

Writer Sean Lewis' poison pen/keyboard offers mean-spirited, angry, violent, crazy, demented and sometimes inappropriate scenes, plots, and subplots.  And that's all I ever wanted.  Lewis is proving to be a true spawn of Hell, a writer determined to activate every bit of dark potential in Spawn.

Javi Fernandez's art and storytelling recalls the early glory days of Todd McFarlane's Spawn art.  Sure some of this art will get him banned in Texas school and public libraries.  Some of it may even cause him to end up in Hell, side by side with Billy Kincaid.  In the meantime, however, Javi is giving Hell-spawned readers their hellish delights.

Tonight, a vampire might be floating outside your house, scratching on your window.  It will be holding a copy of King Spawn #6 just for you.  Seriously, this is a fantastic comic book, and it always, always leaves me wanting more.

[This comic book includes “Spawning Ground” Presents “The Breakdown,” which is an interview of King Spawn writer, Sean Lewis.]