Review: "JUSTICE LEAGUE DARK: Apokolips War" - As Endings Go, This One is Good 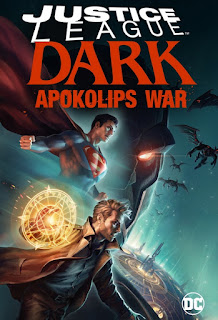 As Justice League Dark: Apokolips War opens, Superman (Jerry O'Connell) has devised a plan in which the Justice League will lead a first-strike attack on the all-powerful New God, Darkseid (Tony Todd), who has made two failed attempts at conquering Earth.  The plan is also for the Teen Titans to stay behind and protect the planet.  Unfortunately for the heroes of Earth, Darkseid has learned of their plans and overwhelms them with his “Paradooms,” a genetic hybrid creature made from combination of Darkseid's Parademons and Doomsday, the alien creature that once “killed” Superman.

Two years later, Earth is in ruins, and Darkseid has placed three devices, known as “Reapers,” on Earth to mine the planet's core of its magma.  Some superheroes, such as Cyborg (Shemar Moore), Wonder Woman (Rosario Dawson), and Batman (Jason O'Mara), are now Darkseid's slaves.  Many of the surviving heroes blame Clark Kent/Superman for leading them into failure, and worse, Superman has been forcibly de-powered after Darkseid tattooed his chest with liquid kryptonite.  Still, the Man of Steel has not given up on saving Earth.

Within the “DC Universe Animated Original Movies,” there is the “DC Animated Movie Universe.”  The line began in 2013 with the straight-to-video release of Justice League: The Flashpoint Paradox and is comprised of 15 feature length films.  The point of the “DC Animated Movie Universe” was to make animated films that were loosely based on “The New 52.”  Started in 2011, “The New 52” was the publishing initiative in which DC Comics relaunched its entire line of superhero comic books.

Justice League Dark: Apokolips War takes the viewers in some inventive and intriguing directions in regards to characters, relationships, and mythologies.  The film offers a surprising amount of emotionally fulfilling character drama and arcs, including the usual Lois Lane and Clark Kent relationship.  However, John Constantine and Zatanna (Camilla Luddington) offer a poignant pairing, but the most surprising is the romance between Damian Wayne and Raven.  They're good enough to be the stars of their own animated film.

The surprising turns and compelling directions in which this film travels are matched by some high quality animation, a strong script, and some surprisingly lean and mean directing.  Such a large cast and so many subplots could have dragged on Apokolips War.  Instead, Justice League Dark: Apokolips War is an exciting and riveting film, and it is a great way to end one universe in the DC Comics multiverse.