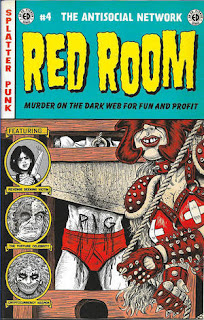 Red Room: The Antisocial Network is a four-issue comic book miniseries from cartoonist Ed Piskor.  It is part of an overall series, entitled Red Room, that will be published by Fantagraphics Books as three miniseries for a total of twelve issues.  Piskor is best known for Hip Hop Family Tree, a comic book that chronicles the early history of Hip-Hop culture.  It has been published in webcomic, graphic novel, and serial comic book form.

Red Room focuses on a murderous, dark web subculture in which a secretive audience pays with cryptocurrency so that it can view “murder for entertainment” in real time via webcam.  A “Red Room” is a place on the Internet with an encrypted I.P. address.  Each Red Room is a webcam stream where viewers can watch a “torture star” murder another human being in the most brutal, savage, vile, and stomach-turning ways.

Red Room: The Antisocial Network #4 opens with the notorious host of this comic book, “the Crypto-Currency Keeper.”  He informs his viewers that Red Rooms existed before the World Wide Web did and takes them back to the days of VHS and Betamax with a story entitled “Cyclical Terror!”

This is the story of Raina Dukes.  Her father, Edward, was the victim of Red Room star, Donna Butcher.  The torture and murder of Edward was titled “Donna Butcher Gets Her Man!,” and was one of the most notorious snuff videos of the 1980s.  However, the tape was digitized for the Internet, gaining it an ever growing audience.  The death of her husband dragged on Raina's mother until the day she died.  Raina has been plotting her revenge for decades...

“Pure Evil!” is the story of Evie.  Once she was Donna Butcher, and her Red Room exploits made her famous.  However, hubris and tax evasion led her to federal prison.  “Snuff Said!” is the story of the eventual meeting of a torture celebrity (Donna Butcher) and revenge seeking victim (Raina), so how will it all work out in the end, for both Evie/Donna and Raina?

THE LOWDOWN:  In “Morgue Files,” Ed Piskor's afterword for each issue of Red Room, he discusses how the spirit of EC Comics' publications shaped Red Room #4.  EC Comics was probably the first great comic book publisher that actually produced excellent comic books crafted by the best writers, artists, and editors.

Science fiction, fantasy, horror, war stories, crime stories, and tales of comeuppance:  EC Comics did it all with style and superb craftsmanship – and a little fine art.  EC's horror comic books also had a horror host/mascot.  The most famous may be “the Crypt-Keeper” from the classic EC title, Tales from the Crypt, which was the inspiration and source material for the HBO television series that ran from 1989 to 1996 and for two spin-off films.

EC Comics which had its heyday from 1949- to 1954 could not have published something like Red Room, as notorious as it comic books were.  However, Piskor's art and story are true to the spirit of EC, especially Red Room #4.  Piskor's compositions and page design are … I'm not sure if I have the words.  If he uses an assistant to help draw Red Room's pages, I would still call him incredible.  If he draws all this by himself, I'll call him “Muad'Dib.”  The craziness, the violence, the anger, the suffering, etc.:  it all comes through the powerful graphical storytelling of Red Room: The Antisocial Network #4.

This fourth issues proves that Red Room: The Antisocial Network is both one of the best debuts of 2021 and one of the best comic books of 2021.  Through the allegories, metaphors, and symbolism, this series has the gift of having a ring of truth and of being prophetic.  If the antics in Red Room seem silly and exaggerated to you, dear readers, your favorite news source can introduce you to the Ukraine.

I READS YOU RECOMMENDS:  Fans of Ed Piskor's work and of alternative comics as science fiction will want to read Red Room: The Antisocial Network.

Posted by Leroy Douresseaux at 1:20 PM