Review: "Murder on the Orient Express" 2017 is More Dark Than Cozy 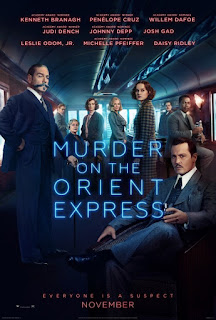 Murder on the Orient Express opens in 1934 and finds renowned Belgian detective, Hercule Poirot (Kenneth Branagh), in the midst of solving a case in Jerusalem.  When Poirot is ready to return to London, his friend, Bouc (Tom Bateman), the nephew of the director of the luxury Orient Express train service, arranges a berth for him aboard the train.

That first night, an avalanche derails the train.  The next morning, Poirot discovers that Edward Ratchett has been murdered and stabbed 12 times.  Poirot and Bouc begin investigating the passengers in order to discover Ratchett's killer, but this case will be quite trying for the esteemed Monsieur Poirot.  He does not lie, and this case may force him to do just that.

The first film adaptation of Agatha Christie's novel, Murder on the Orient Express (1974), was one of only two films adapted from her work that she liked.  [The other was the 1957 film, Witness for the Prosecution, which was based on Christie's 1953 play, The Witness for the Prosecution.]  In the first film, the late actor Albert Finney gives a tremendous performance as Hercule Poirot, one that earned him an Oscar nomination.  The 1974 film is a classic murder mystery film made classier and more artful by its stellar cast of stars from Hollywood films and international cinema.

Murder on the Orient Express 2017 is stylish and modern with plenty of production values created by computers.  Its cast is a mix of established stars, Oscar-winning actors, and up-and-coming talent.  The 2017 film is so stylish that it often comes across as too cold and too determined to be an Oscar-worthy period piece and costume drama.  Kenneth Branagh, as the film's director and as its leading star (playing Hercule Poirot), sometimes seems lost in the technical details of directing his showy, award-winning cast and in creating an eccentric, OCD, smarter-than-everyone-else detective.

However, Murder on the Orient Express 2017 really shows its power in the last thirty minutes of the film.  The 1974 film offered a tidy happy ending.  The 2017 offers a thoroughly messy happy ending that is more befitting of these troubled, modern times.  Branagh and writer Michael Green turn the last act's revelation of whodunit into an edgy, dark exercise.  Truth be told, dammit!  But it will be done so with all the rawness of grief and the bitterness and hatred of revenge.  No one gets out of this resolution unscathed, and the healing will likely leave painful scabs.

I like Murder on the Orient Express 2017.  I like that the ethnicity and national origins of the cast are more diverse than what is in the 1974 film and in the original novel.  I like that it plainly leaves us with the message that murder is murder – no matter how good the intentions are – and that pain will temporarily make killers of those who are not really killers at heart.  I wonder what Agathie Christie would think of this take on Murder on the Orient Express.

I like Murder on the Orient Express 2017 mainly because it decides not to be cozy about the murder mystery.  I hope the follow up to this film, the just released Death on the Nile, is also this aggressive.