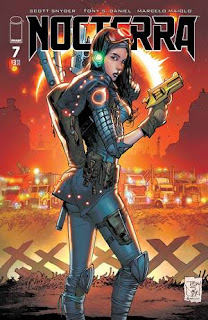 “Pedal to the Metal” Part One

Nocterra is a horror and science fiction comic book series from writer Scott Snyder and artist Tony S. Daniel.  Published by Image Comics, Nocterra is set on an Earth that has been experiencing an everlasting night, the “Big PM,” since the sky went dark and the world was plunged into an everlasting night over a decade ago.  Inker Sandu Florea, colorist Marcelo Maiolo, and letterer Andworld Design complete the series' creative current team.

Valentina “Val” Riggs – call sign “Sundog,” – was in the fifth grade the day the “Big PM” occurred.  Fourteen years later (“14 PM”), Val drives a big rig hauler, a heavily-illuminated 18-wheeler known as the “Sundog Convoy.”  A skilled “ferryman” Val transports people and goods along deadly unlit roads between the few remaining human outposts.  Aboard her rig is Bailey McCray, the rig's “bean counter,” and Emory “Em” Riggs, Val's brother who was cured of the Shade infection.

As Nocterra #7 opens, it is almost “14 PM,” fourteen years after the “Big PM.”  The Sundog leads a convoy of four rigs, including itself.  Their goal is Outpost 31, also known as the “Drive-in.”  They're hoping to get information on Bailey's late grandfather, August McCray, who may have been one of the people who helped bring the darkness, but who also claimed to have a way to bring back the light.

Meanwhile, Blacktop Bill meets some old friends.  Can Val and friends save the world?  And what dirty deals with they have to make to do it?

THE LOWDOWN:  After the sour taste that the Nocterra Blacktop Bill Special left in my imagination, I needed the the first chapter of the main series' second story arc, “Pedal to the Metal,” to bring back the good feelings this series gave me.  It did.

From the beginning of Nocterra, writer Scott Snyder has offered his readers a comic book series that reads like an old-fashioned pulp serial, complete with cliffhanger endings.  Nocterra is a mixed genre treat; sometimes it is like a penny dreadful and other times it is constantly dropping apocalyptic science fiction elements.

Now drawing with an inker (Sandu Florea) and with a new colorist Marcelo Maiolo, artist Tony S. Daniel electric storytelling is still … electric, moving swiftly from panel to panel.  Daniel builds up to an occasional big splash sequence that makes the story explode off the page while hitting the key points of the plot.  It makes for engaging and bracing comic book storytelling.

Nocterra is back.  And here, the dark is still good.

I READS YOU RECOMMENDS:  Fans of Scott Snyder and Tony S. Daniel will want to sample Nocterra.