"Fantastic Four" is Fantastic for the Entire Family 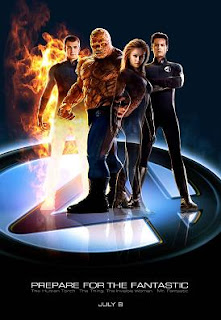 SUPERHERO/ACTION/SCI-FI/ADVENTURE with elements of comedy

Marvel Comics longest running comic book series is the Fantastic Four, subtitled “The World’s Greatest Comic Book Magazine,” but Spider-Man is Marvel’s best known characters, while the X-Men are the most popular characters in North American comic book publishing; both the Spider-Man and the X-Men are also successful film franchises. However, there has been a nearly ten-year struggle to bring the Fantastic Four to the screen, and now, it’s finally happened. Fresh off Barbershop (2002) and the Queen Latifah vehicle, Taxi (2004), director Tim Story wows audiences with the Fantastic Four, the long-awaited silver screen appearance of Marvel’s first family, and unlike some other comic book to film adaptations (Sin City to name one), Fantastic Four is a joy ride for kids.

Reed Richards (Ioan Gruffudd), financially strapped scientific genius, has an important experiment that requires his use orbital space lab of his long-time rival, the jealous and grudge-holding Victor Von Doom (Julian McMahon). Von Doom insists on accompanying Richards to the station. Also aboard the station for the research mission is Reed’s ex-girlfriend, Sue Storm (Jessica Alba), who now works for Von Doom, Sue’s brother, hot shot pilot Johnny Storm (Chris Evans), and Reed’s long-time friend, Ben Grimm (Michael Chiklis), who more or less is Reed’s bodyguard. However, something goes wrong, and all five of them are exposed to an intense band of radiation that transforms their DNA and their bodies. Reed suddenly can stretch any part of his anatomy. Sue can turn invisible and create an invisible force field. Johnny can turn his body into living flame. Ben becomes a monster with a rock-like body. Victor’s skin eventually turns metallic and can absorb electricity.

After their powers become public, Johnny gives his compatriots names: Reed is Mr. Fantastic; Sue is the Invisible Girl; Ben is The Thing; and Johnny is the Human Torch. Together, they become known as the Fantastic Four, and though Reed, Sue, and Ben would like to be cured of their powers and new found physical gifts (or curses), they must band together as a quartet to save New York City from Victor, who becomes the super villain, Dr. Doom, a man bent on destroying the Fantastic Four and ruling the world.

The Incredibles was kind of an update or riff off the Fantastic Four, which is as much superhero action/adventure and fantasy fun as The Incredibles was, although FF is not nearly as well written and directed as the Pixar computer-animated hit. Still the emphasis is on fun. The Human Torch’s firepower is constantly on display, as he blazes across the sky like a pretty Christmas light with a rocket engine on it. Also, the Thing’s physical appearance and his monstrous strength are perfect for youngsters looking for vicarious wish fulfillment, because the brute wrecks, squashes, smashes, and breaks a lot during the course of the film. And I can’t forget that Mr. Fantastic’s stretching powers will cause a giggle or two, and they certainly made my eyes widen on a few occasions. The Fantastic Four comic book never made the Invisible Woman’s powers look as good as they do on the big screen.

The acting is good. Ioan Gruffudd is thoughtful and straight-laced as the serious and contemplative Reed Richards/Mr. Fantastic. He’s not the infinitely intelligent leader that he is in the comic, and sometimes he comes across in the film as a bit too befuddled. Still, he’s more human and likeable here; I get the feeling that the filmmakers either didn’t know quite what to do with him or they didn’t like the character enough to make him the big boss he is in the comics.

For all her acting woes, Jessica Alba is a little spitfire as Sue Storm/Invisible Woman who keeps the boys in line. She’s a heroine for today; she doesn’t consider herself to be a second-class citizen. Yes, she’s boy crazy about Reed, but she’ll speak her mind to him. Even better, she won’t back down one bit in a fierce battle. Her screen chemistry with Gruffudd gets better as the film goes along, although it’s limp at first. I figure the relationship between the two characters will be tinkered with in any potential sequel, giving the actors more with which to work.

Michael Chiklis gives a surprisingly good turn as The Thing; even under the heavy and very thick suit he has to wear to portray the Thing, he gives the character a range of emotions and the air of the tragic, misunderstood monster. Chiklis plays the Thing as a heavily burdened man whose life is suddenly destroyed by his transformation into a monster. Sometimes the down-on-life bit gets too thick, but Chiklis still gives a good performance under all that makeup and costume, and his portrayal of Ben Grimm the human is pure action movie hero. It would be good to see more of that Ben Grimm in the Thing and less “woe is me” in a sequel.

The Thing is my number two favorite character in the film after Chris Evans’ hilarious and energetic ball of fire, Johnny Storm, the Human Torch. Evans is superb comic relief for the film; his antics, handsomeness, and cockiness is the much-needed smoke and mirrors for this film. Sometimes Johnny’s comic clowning around hides some serious flaws in this film, but he’s still fun to watch. Evans really seems to enjoy the role (as does the rest of the cast), and that comes across in the performance and entertainment value of the film.

The costumes, sets, makeup effects, and special effects are very good – not as good as Star Wars or War of the Worlds, but good enough to bring the Fantastic Four to life in a fashion that couldn’t have been done cost-effectively a decade ago or at all 15 to 20 years ago. The Human Torch’s special effects are quite simply great, and the Thing’s suit makes him look like a real, living, breathing monster. The Fantastic Four’s blue one-piece costumes are quite nice and look like they belong on comic book heroes, which makes them three times better than most of the Batsuits in the Batman film franchise.

The script, by Michael (The Hulk and The Punisher) France and Mark Frost, co-creator of the cult TV series, “Twin Peaks,” is weak; it’s mostly story-driven, rather than relying on a plot. That’s not a problem. What is the problem is that the hero/villain conflict takes too long to get going. We know early on that Victor Von Doom (nicely played by “Nip/Tuck’s” Julian McMahon as an anal, self-centered, egomaniac) is the bad guy, but the film is nearly over by the time he really tussles with the Fantastic Four. Also, the script seems to emphasize action and effects over character, and that’s a shame because the characters have so much potential. The Incredibles, the film that is so close to the FF, got a lot of mileage out of playing up individual characters and their quirks. In the end, it’s director Tim Story’s ability to weave action and comedy as he did so well in Taxi (2004) that glosses over the clunk in the script.

Combine high quality sci-fi/fantasy production values with a cast that believes in their characters and enthusiastically brings them to life and you have the makings of a very good film. The final product is a superhero movie that is more for the kids than Batman Begins (the youngsters that I saw this flick with were totally into the film), and Fantastic Four recaptures what it felt like to read a great adventure comic. There aren’t many of those around anymore, but thankfully this new Fantastic Four movie will make up for what today’s juvenile and “tween” readers can no longer get. Nothing says that better than seeing Ben Grimm, the Thing in action and the Human Torch blazing across the city sky like a flaming rocket.

Posted by Leroy Douresseaux at 1:40 PM