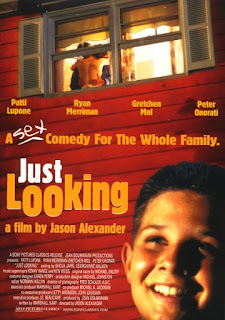 The subject of this movie review is Just Looking, a 1999 independent film about a teen boy obsessed with seeing two people make love. A comedy and drama, the film is directed by comic actor, Jason Alexander.

Most know Jason Alexander as the irascible “George Costanza” of the classic television series, Seinfeld. In Just Looking, a coming-of-age story set in Queens, circa summer 1955, he is a film director.

It’s June 1955 in the Bronx. Our intrepid hero is a fifteen year-old boy named Lenny Levine (Ryan Merriman), and he has a rabid case of sex-on-the-brain. It’s been a year since his father passed away, and he doesn’t really get along with his new stepfather Polinksy (Richard V. Licata), an associate of his late father. His mother Sylvia (Patti LuPone) plans for Lenny to spend the summer in Queens with her sister Norma (Ilana Levine) and her Italian stud husband Phil (Peter Onorati). Once there, he makes a few friends who he believes can help him to achieve his goal of catching some couple in the act of lovemaking. He has his first big crush in the form of a nurse/part-time model Hedy (Gretchen Mol), and it is in her that he receives his first real education in the politics of relationships and sex.

No, Lenny doesn’t have sex with Hedy, although he does want to catch her in the act with someone more than he wants to catch anyone else. Just Looking is nothing spectacular; at times, it seems more like a television movie. Although movie audiences have come to expect such visually intense experiences from their films, a soft curve ball like Just Looking barely gets a look. While not a dramatic bombshell, it is a pleasant film with a nice story. The sexual content is plain, matter-of-fact, and clumsy enough to seem real, so the sexual issues have a more natural, unforced feel and mean more to the film than most boot-knocking scenes mean in other, more tawdry movies “about” sex.

Alexander and screenwriter Marshall Karp move the film from beginning to end towards an important life lesson. Now, this might make it sound like an afternoon special or a TV movie, but the film is really a good movie with a good point. While watching it, I was pleasantly entertained, and by the end, I had decided that I’d really liked it. In its own quite way, Just Looking resonated with me.

The performances are honest and good, being only a tad stereotypical and familiar at times. This is good honest work by a group of skilled filmmakers, and I can pretty much guarantee that anyone who watches it will find the story oddly familiar and identify with some of what it has to say.

Posted by Leroy Douresseaux at 12:47 PM