The Cabin in the Woods review 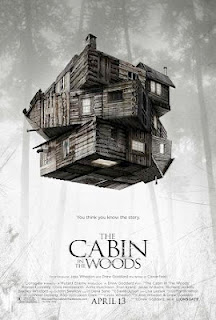 HORROR/COMEDY with elements of an action film

The Cabin in the Woods is a 2012 comedy horror film directed and co-written by Drew Goddard and produced and co-written by Joss Whedon. Whedon and Goddard worked together on Whedon’s television series, Buffy the Vampire Slayer and its spin-off, Angel. The film focuses on five friends who visit a remote cabin in the woods where they get more than the fun they bargained for.

Dana Polk (Kristen Connolly), Curt Vaughan (Chris Hemsworth), Jules Louden (Anna Hutchison), Marty Mikalski (Fran Kranz), and the new guy, Holden McCrea (Jesse Williams), decide to take a break from school. The group travels to a remote area where there is a cabin owned by Curt’s cousin. They like the cabin’s rustic décor, but are surprised to find that the cellar is full of weird and bizarre odds and ends. They don’t know that their visit to the cabin in the woods has initiated something horrifying.

Anyway, as is to be expected of anything from two of the big Buffy/Angel guys, The Cabin in the Woods is fun and funny, and it also has a clever concept. However, the film never really seems to reach its potential; it’s as if Whedon and Goddard came up with an idea that deserved something bigger than what they planned for it. It is almost a good slasher movie; not quite developed enough to be a supernatural evil movie; and a slight misfire as a strange science fiction and H.P. Lovecraft-type weird horror movie.

Still, The Cabin in the Woods is funny, strange, and clever enough to be a welcome change for horror movie fans. Maybe, the film is such a novelty that its tricks could not work a second time, but for the most part, they work this first time.

Posted by Leroy Douresseaux at 1:49 PM