"John Carter" Will Show You a Good Time 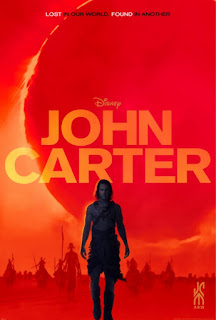 The subject of this movie review is John Carter, a 2012 American science fiction and fantasy film released by Walt Disney Pictures. John Carter is the first live-action film from director Andrew Stanton, who won Oscars for directing the computer-animated films, Finding Nemo (2003) and WALL-E (2008) for Pixar.

John Carter is largely based upon the 1917 novel, A Princess of Mars, written by Edgar Rice Burroughs (the creator of Tarzan of the Apes). A Princess of Mars began life in 1912 as Under the Moons of Mars, a serial in the pulp fiction magazine, The All-Story. A Princess of Mars is the first novel in the 11-book “Barsoom series” The film focuses on a former Confederate Army officer of the American Civil War who is transported to Mars, where he meets a princess in desperate need of a savior.

It is 1868, and John Carter (Taylor Kitsch) is in the Arizona Territory where he has a dangerous encounter with the Apache. After escaping them, Carter hides in a cave. He has an extraordinary experience in which he gets transported to the planet Mars, which the inhabitants call “Barsoom.” There, he meets 15-foot tall Martians called Tharks and the human-like Red Martians. Two of the Red Martian cities, Zodanga and Helium, have been at war for a thousand years. However, the Therns, a group of mystic types, have taken Zodanga’s side.

Thern leader, Matai Shang (Mark Strong), gives Sab Than (Dominic West), the leader of Zodanga, a special weapon which will turn the tide of the war in his favor. Now, Than can force a ceasefire and use his advantage to demand that Tardos Mors (Ciaran Hinds), surrender his daughter, Dejah Thoris (Lynn Collins), to him for a marriage that will unite Zodanga and Helium. When Dejah meets John Carter, she see someone who can save her people from Than’s machinations. After the losses he suffered during the Civil War, however, is John Carter ready to help a princess of Mars?

John Carter is an entertaining film. It was something of a major box office disappointment, and Disney reportedly took a write-off somewhere in the neighborhood of 200 million dollars because of John Carter. Some movies deserve to be flops, but John Carter isn’t one of them. It’s one of those odd, swashbuckling, effects-laden adventure movies that come across as weird when you only see a few minutes of it in a trailer or commercial. These movies fail to meet box office expectations, but I think when people see them, they realize what harmless, even charming fun these movies are. Another example would be Prince of Persia: The Sands of Time, another pricey Disney disappointment at the box office.

A Princess of Mars and the other Barsoom novels would go on to influence science fiction writers such as Robert Heinlein and Ray Bradbury and such film’s as James Cameron’s Avatar and George Lucas’ Star Wars. However, the series is outdated and quaint, and the genre to which it belongs, interplanetary romance, is practically dead. Some readers of science fiction and fantasy and also people interested in pulp fiction and nostalgia will like the Barsoom stories. Beyond that, much of the audience for movies may ask, what’s the point of this? So much about this movie is just too old-fashioned, outdated, and weird for modern audiences.

John Carter is, from the point of production values and special visual effects, quite well made. The screenplay is as wonky as the source material, but the actors seem genuinely interested in selling their characters and this concept. The big problem with this movie is that the gadgets, tech, and other science fiction stuff – all the cool toys – are under-utilized. John Carter is more like a sword and sandal/sword and sorcery, Conan the Barbarian movie than it is a science fiction movie. Plus, there isn’t enough Mark Strong in this film; you can never have too much Mark Strong.

Anyway, movie audiences that enjoy anything science fiction and fantasy will find an entertaining oddity in John Carter. I liked it, and wouldn’t mind seeing a sequel.

Posted by Leroy Douresseaux at 8:55 PM