Review: "Hancock" Fails to Be Special (Happy B'day, Will Smith) 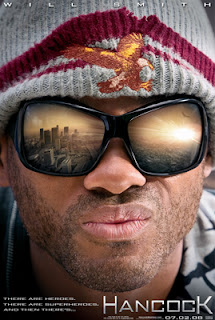 The subject of this movie review is Hancock, a 2006 superhero film starring Will Smith in the title role. Directed by Peter Berg, the film is part action movie, comedy, and drama, as well as part superhero fantasy.

Will Smith’s new film, Hancock, is a special effects-heavy movie about a superhero who is a drunken, dangerously careless jerk. Instead of looking shiny and futuristic in a fancy costume, he looks like a skid row bum in thrift store rags, but that’s not necessarily a bad thing. When the story presents this hero’s very public disasters and later his public struggles to be a good guy, this film is quite good, but sadly, it’s not always that good.

John Hancock (Will Smith) is the only superhero on the planet. He lives and works in Los Angeles, and boy, is everywhere else very happy that L.A. is stuck with him. If great power comes with great responsibility, Hancock ain’t buying that notion. He’s edgy, sarcastic, and prone to abusing civilians. His well-intentioned heroics get the job done saving lives and stopping criminals, but the same heroics always seem to leave jaw-dropping damage in their wake.

Los Angelinos have finally had enough. As far as they are concerned, if Hancock can’t do the job right (i.e. without causing millions of dollars in damages every time he plays hero), he needs to go away. But Hancock isn't the kind of man who cares what other people think; then, one day he saves the life of struggling PR executive Ray Embrey (Jason Batman). Grateful to be alive, Ray chooses to see his savior not as a menace, but as conflicted and misunderstood, so Ray convinces Hancock to let him embark on an image makeover of the hero. Hancock even sits down to a decent meal with Ray’s wife, Mary (Charlize Theron), and young son, Aaron (Jae Head). Hancock’s biggest obstacle, however, may be submitting to a prison sentence and finally facing both his demons and his past.

Peter Berg’s quasi-superhero film, Hancock, is at its best when the film presents Hancock fighting the war inside his head out in public. He’s adrift – doesn’t know who he is or remember from where he came. His life is a mess, so he’s messy on the job – literally tearing apart the city’s infrastructure and terrorizing the citizens. Watching those disasters are actually fun.

As fun as the action sequences and Hancock’s confrontations with the public are, the focus only on Hancock’s mental problems is not. It seems that somewhere along the line of developing this project, the filmmakers missed the point that watching Hancock interact with the public is great. When the film focuses on John Hancock’s origin (no spoilers here!) or features him alone, drinking and sulking about, it becomes a morose drama.

This great concept doesn’t exactly fail because of the shaky execution, but Hancock is a strange movie because half of it is a fun, high-concept superhero flick and the other half is a depressed superhero drama. It’s bizarre a situation. Will Smith is so good at creating this mentally, emotionally, and spiritually troubled super human that he also creates a somewhat unsatisfying hero that makes for a movie that is sometimes … well, unsatisfying.

Luckily Jason Bateman (who doesn’t make a bad move in this performance), as Ray Embrey, is so good at understanding what a movie needs at particular moment in the story. It’s the right facial expression, the perfect quip, or the best time to be serious. This movie is victorious when Smith’s Hancock and Bateman’s Embrey are onscreen together. Too bad Hancock doesn’t stick with that simple, yet highly entertaining formula.