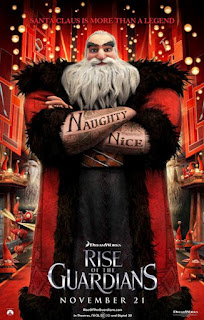 Said Bill Damaschke, Chief Creative Officer at DreamWorks Animation, "This award is a testament to the vision and dedication of our director Peter Ramsey and our producers Christina Steinberg and Nancy Bernstein, who saw in William Joyce's beautifully written books a truly magical world that he was able to bring to life with the help of David Lindsay-Abaire's wonderful screenplay and, of course, the outstanding work by his entire filmmaking team. We could not be more proud of the movie, or this recognition, and we thank Carlos and the Hollywood Film Awards for this great honor."

Past recipients of the Hollywood Animation Award include "Cars," "Rango," "Ratatouille," "Toy Story 3," "UP," and "Wall-E."


ABOUT "RISE OF THE GUARDIANS"
"Rise of the Guardians" is an epic and magical adventure that tells the story of Santa Claus, the Easter Bunny, the Tooth Fairy, the Sandman, and Jack Frost's legendary characters with previously unknown extraordinary abilities. When an evil spirit known as Pitch lays down the gauntlet to take over the world, the immortal Guardians must join forces to protect the hopes, beliefs, and imagination of children everywhere.

ABOUT THE LOS ANGELES TIMES
The Los Angeles Times is the largest metropolitan daily newspaper in the country, with a daily readership of 1.6 million and 2.7 million on Sunday, more than 16 million unique latimes.com visitors monthly and a combined print and online local weekly audience of 4.4 million. The Pulitzer Prize-winning Times has been covering Southern California for more than 130 years.

The Los Angeles Times Media Group (LATMG) businesses and affiliates include the Los Angeles Times, The Envelope, Times Community News and Hoy Los Angeles and reach approximately 5.2 million or 39% of all adults in the Southern California marketplace. LATMG also owns and operates California Community News, as well as Tribune Direct's west coast division and is part of Tribune Company, one of the country's leading media companies with businesses in publishing, the Internet and broadcasting. Additional information is available at http://latimes.com/aboutus.

ABOUT THE HOLLYWOOD FILM AWARDS
The Hollywood Film Awards were created to honor excellence in the art of filmmaking, both in front of and behind the camera, and launch the awards season. The criteria is: recipients are selected to be honored for their body of work and/or a film(s) that is to be released between January 1 and December 31 by an advisory team. In addition, for the recipients of our "film awards craft categories" (aside from evaluating their body of work), our Advisory team takes into consideration the recommendation of their guilds/societies. Last year alone, our recipients received 12 nominations and 5 Oscars. In the last 9 years, a total of 85 Oscar nominations and 32 Oscars were given to our honorees. The awards are bestowed at a GALA ceremony that takes place at the prestigious Beverly Hilton Hotel in Beverly Hills.

Posted by Leroy Douresseaux at 1:04 PM