"Think Like a Man" a Frothy Battle of the Sexes 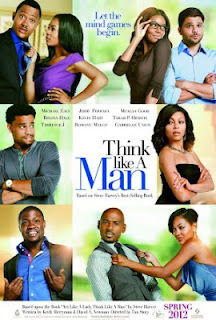 Think Like a Man is a 2012 ensemble romantic comedy from director Tim Story (Fantastic Four). The film is based on comedian and actor Steve Harvey’s 2009 advice book, Act Like a Lady, Think Like a Man. The film follows four male friends who conspire to turn the tables on the women in their lives when they discover that their ladies have been using Steve Harvey’s relationship advice against them.

Cedric (Kevin Hart), Dominic (Michael Ealy), Zeke (Romany Malco), Michael (Terrence J), Jeremy (Jerry Ferrara), and Bennett (Gary Owen) are friends who like to get together and talk about their relationships with women. Cedric is going through a divorce, and Bennett is happily married. Jeremy’s relationship with his longtime girlfriend, Kristen (Gabrielle Union), is frayed, although he doesn’t seem to notice it. Dominic uses deception to begin a relationship with Lauren (Taraji P. Henson), a successful businesswoman.

Zeke meets Mya (Meagan Good), a young woman who has just decided that before she has sex with a new boyfriend, he has to wait 90 days. Zeke, however, always wants to “hit it” right away. Michael begins a relationship with Candace (Regina Hall), a single mother, but Michael is a mama’s boy, and that creates strife in the new relationship.

However, Kristen, Lauren, Mya, and Candace decide to take the advice of Steve Harvey (playing himself) as presented in his book, Act Like a Lady, Think Like a Man, to help them get the upper hand in their relationships. When the guys discover what their ladies are doing, they decide to get familiar with the same book. Game on!

The first thing I want to say is that Kevin Hart is a pure scene-stealer. Hart not only plays a character, Cedric, but he is also the film’s narrator. As the narrator, he practically owns half this movie. He’s good; he’s funny.

The other half of the ownership goes to director Tim Story. I think that Story’s talent as a director is largely untapped. His two Fantastic Four films for 20th Century Fox were underserved by uneven screenwriting. Story shows his skills in Think Like a Man, because there are so many characters and so many actors playing them that the director has to get a handle on them. Handle them Story does, which is quite a feat, as there are way too many characters in this movie. Still, Story gives every actor the opportunity to make the most of his or her character, and most of the actors take advantage of the opportunities. That is why Think Like a Man movie works.

Think Like a Man is a frothy, romantic comedy, and it has the same cinematic bubbles and fizz to tickle the nose that movie audiences find in frivolous romantic comedies featuring predominately white casts. Tim Story delivers the same feel-good charm which directors of those other films do, but with a way-too large cast.

Think Like a Man may be the best romantic comedy starring a predominately African-American cast to date. It’s sweet and filled with empty calories, but they feel good going down. They’re so good that you might want more… later.