"Fantastic Four: Rise of the Silver Surfer" Does Not Rise Much 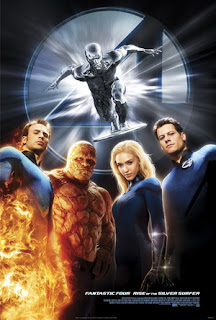 Fantastic Four: Rise of the Silver Surfer, like it predecessor, the 2005 surprise hit, Fantastic Four, is a superhero blockbuster aimed squarely at younger children. That sets this franchise apart from most superhero films, which while ostensibly family films, tend to skew older with darker stories.

As the film begins, the members of the dysfunctional family known as the Fantastic Four have their hands full. Reed Richards/Mr. Fantastic (Ioan Gruffudd) and Susan Storm/Invisible Woman (Jessica Alba) are getting married, but Sue can’t keep Reed’s mind off his work and on wedding planning. Meanwhile, Ben Grimm/The Thing (Michael Chiklis) has found peace and love in his relationship with the blind artist, Alicia Masters (Kerry Washington). And Johnny Storm/The Human Torch (Chris Evans)? Well, Johnny just wants to market the FF as a brand that attracts sponsors, advertisers, and media willing to pay for exclusive access to the team.

The nuptials are interrupted by the arrival on Earth of an enigmatic being that Reed dubs The Silver Surfer. The Surfer is actually an intergalactic herald for a planet devouring being called Galactus. As the Surfer races on his board around the world wreaking havoc, the Fantastic Four must unravel the mystery of the Surfer and confront their mortal enemy Victor Von Doom a.k.a. Dr. Doom (Julian McMahon, who is terrible in this role), as he returns claiming to want to help defeat the Surfer. All of this puts stress on the delicate bonds of this fragile family called the Fantastic Four.

Director Tim Story’s second film attempt at the Fantastic Four is harmless fun, but it’s also vapid. It’s entertaining, but mostly empty. Lacking a good script (although the main plot is fun), Fantastic Four: Rise of the Silver Surfer is the kind of dumb, silly, and simple-minded entertainment that many people think of when they do think of comics. This isn’t bad, but FF: TROTSS just lacks the kind of epic scope and widescreen sensibilities that the original comics by Stan Lee and Jack Kirby had.

There are few good thinks about this film. Chris Evans plays Johnny Storm as a skirt-chasing, smart ass, and his presence just makes the Fantastic Four films better. To create the Silver Surfer, Doug Jones provides the physical acting, and Laurence Fishburne gives voice to the Silver Surfer. CGI finishes the work, and we have a cool looking, scene-stealing character. Every moment the Surfer is on screen the movie suddenly doesn’t seem like a slightly awkward, self-consciously clumsy kids’ flick. So adults beware; this is a mild amusement, but it’s even better for the young viewers.