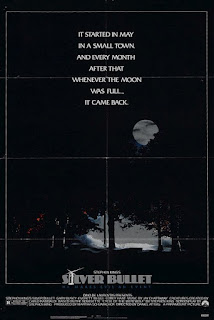 HORROR with an element of mystery

The subject of this movie review is Silver Bullet, a 1985 werewolf horror movie. The film is based upon the 1985 short novel, Cycle of the Werewolf, from famed horror author, Stephen King.

Famed best-selling novelist Stephen King spent a lot of the 80’s whining about the film adaptation of his novels. Given a chance to prove how good he’d be at filmmaking, he took it. Stephen King’s Silver Bullet (the film’s complete USA title) was his effort as a screenwriter, and while it isn’t ugly, the script isn’t the prettiest girl in screen town. The film flopped, not making a return on its production budget (reportedly 7 million) at the box office (around $5.5 million). Still, Silver Bullet would certainly make my top 25 list of best horror films, as it’s a delightful little scary campfire tale.

In the town of Tarker’s Mill, a series of sadistic murders begins in the late spring of 1976. A wheel chair bound boy named Marty Coslaw (Corey Haim) discovers that the killer is not maniac, but a werewolf. He convinces his sister, Jane (Megan Follows), that there really is a killer werewolf in town, but Marty and Jane (who narrates the story) can’t make their Uncle Red (Gary Busey), with whom Marty is very close, believe them. However, Uncle Red does build a motorized wheel chair/motor cycle, christened the “Silver Bullet,” that comes in handy when Marty needs to avoid both the werewolf and its human form, a prominent and highly respected member of the Tarker’s Mill. Eventually, the siblings convince Uncle Red enough to get him to join them in an attempt to destroy the werewolf.

While not a great film, Silver Bullet is an excellent mystery horror film that is teen friendly in it’s edited-for-TV version. Actually, the R-rated, theatrical version seems to have gore and violence strictly for titillation. The performances are passable and the production values are of made-for-TV quality, but the film’s small town setting feels authentic, enough to make the atmosphere of a small town under siege feel real. Stephen King’s Silver Bullet isn’t great, but it’s a quaint little horror film worth watching with some genuinely good scary movie moments.