"Wrath of the Titans" Mostly Tepid 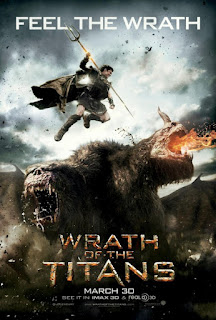 Released earlier this year, Wrath of the Titans is a 2012 American fantasy film. It is a sequel to the 2010 version of Clash of the Titans (itself a remake of the 1981 film of the same name). Perseus, the hero of first film, must free his father, Zeus, from the underworld and also stop an ancient evil from destroying the universe. Louis Leterrier, the director of the 2010 film, acts as one of Wrath of the Titans’ executive producers.

Wrath of the Titans opens a decade after Perseus’ heroic defeat of the monstrous Kraken. Since the death of his wife, Io, Perseus (Sam Worthington), the demigod son of Zeus, is attempting to live a quiet life as a village fisherman and as the sole parent to his 10-year old son, Helius (John Bell). Meanwhile, the power of the gods has been fading, and the walls of the underworld prison, Tartarus, are breaking and threatening to free the imprisoned Titans. Both are caused by humanity’s growing lack of devotion to the gods.

Zeus (Liam Neeson) and Poseidon (Danny Huston) travel to Tartarus to meet their estranged brother, Hades (Ralph Fiennes), hoping that they can reunite and rebuild Tartarus’ walls, but Hades has other plans. He imprisons Zeus and begins to drain him of his divine power, which Hades will use to revive the monstrous Kronos, the father of Zeus, Hades, and Poseidon. As Kronos slowly revives, the Titans are loosed upon Earth.

Now, Perseus leads a small band of brave souls towards the treacherous underworld to rescue his father, Zeus. He must also gather the three great weapons of Zeus, Hades, and Poseidon: Zeus’ Thunderbolt, Hades’ Pitchfork, and Poseidon’s Trident, in order to form the one weapon that can stop Kronos, the Spear of Trium.

I’m not sure what I should say about Wrath of the Titans. I liked some of it, especially the last act, which is mostly action and which mostly held my attention. I strongly disliked the first act, which is mechanical and surprisingly unimaginative. The middle act has some good ideas and moments. Wrath of the Titans lacks the charm of the 1981 film, and in this film, Perseus, lacks the passion he had in the 2010 movie. That is surprising considering that Perseus has something big for which he must fight – a son.

I can say that after seeing this, I am glad that I didn’t go to the trouble of driving to the local cinema and spending money for a ticket to see Wrath of the Titans. I think that it is time to put this franchise to rest.

Posted by Leroy Douresseaux at 3:18 PM