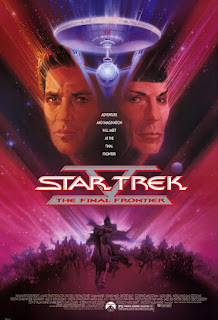 The subject of this movie review is Star Trek V: The Final Frontier, a 1989 science fiction adventure film. It is the fifth film in the Star Trek film franchise, and the second-to-last (or penultimate) to feature the cast of the original Star Trek television series. The Final Frontier takes place shortly after Star Trek IV: The Voyage Home and pits the crew of the USS Enterprise against a renegade Vulcan.

The crew of the original “Star Trek” returned for its fifth cinematic adventure, Star Trek V: The Final Frontier. Captain James T. Kirk (William Shatner) is sharing his shore leave with Spock (Leonard Nimoy) and Dr. Leonard “Bones” McCoy (DeForest Kelley) in Yosemite National Park, where Kirk is attempting to climb the mountain, El Capitan, freestyle (without gear). The festivities, however, are cut short when the Federation sends the U.S.S. Enterprise on an emergency mission to the Neutral Zone.

The Enterprise arrives at the planet, Nimbus III, where, Sybock (Laurence Luckinbill), a renegade Vulcan who shares a past with Spock, hijacks the Enterprise. He pilots it on a journey past The Great Barrier to a mythical planet named Sha Ka Ree, where Sybock hopes to uncover the secrets of existence. It’s up to the Star Trek holy trinity of Kirk, Spock, and Bones to keep the crew and this new Enterprise (Enterprise-A) safe while Sybock obsesses on his quest. Meanwhile, a Klingon warship, a bird of prey, stalks the Enterprise.

Star Trek V stumbles because it tries to be a sci-fi action flick, a tale of brotherly love, a therapy session, and a spiritual odyssey. It doesn’t do three of them well, but The Final Frontier does work as a nice spotlight on the relationship of Kirk, Spock, and Bones. Star Trek V: The Final Frontier is the least of the six movies featuring the original crew of the Enterprise, but production problems (including loosing their special effects house of choice) played a part in this film not coming together as director William Shatner envisioned it. It isn’t all that satisfying as a Trek flick, but it’ll do in a pinch.

Posted by Leroy Douresseaux at 4:25 AM