"Surf's Up" Has Impressive Animation 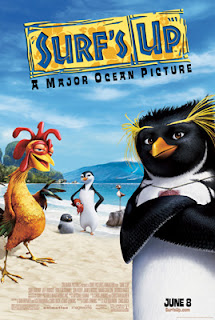 ANIMATION/COMEDY/SPORTS with elements of drama

The subject of this movie review is Surf’s Up, a 2007 computer-animated film directed by Ash Brannon and Chris Buck. The film is a mock documentary or “mockumentary” (with This is Spinal Tap being the most famous example). It was one of three 2007 films to receive best animated feature Oscar nominations (a category Ratatouille won).

A documentary film crew follows a young penguin who loves to surf in Surf’s Up, the computer-animated film from Sony Pictures Animation (Open Season) which takes the notion that penguins invented surfing.

Cody Maverick (Shia LaBeouf) is not like the other penguins in Shiverpool, Antarctica. He’d rather surf than process fish all day. Opportunity arrives when he talks his way into the Big Z Memorial Surf-Off, an international surf tournament named in memory of Cody’s idol, the legendary surfing penguin, Zeke “Big Z” Topanga.

When Cody arrives on Pen Gu Island, he realizes that he doesn’t really fit in very well because he is a small wave surfer in a big wave event. He quickly earns the ire of a mouthy surfing promoter, a hedgehog named Reggie Belafonte (James Woods), and the 9-time reigning champion, the utterly arrogant penguin Tank “The Shredder” Evans (Diedrich Bader). Cody does manage to make a fast friend in Chicken Joe (Jon Heder), a surfing rooster from Michigan, and also attract the attention of sexy lifeguard, Lani Aliikai (Zooey Deschanel). However, it’s when he meets the mysterious Geek (Jeff Bridges), a reclusive penguin who lives on the other side of the island that Cody learns there is more to discover in surfing than just how to win a tournament.

Although on the surface it resembles leftovers from the Oscar-winning computer-animated hit, Happy Feet (2006), Surf’s Up is actually a good film on its own. It is an entertaining comedy that not only has some really cool surfing scenes, but also has a nice message about friendship. Shia LaBeouf and Jeff Bridges have excellent chemistry, which may be due to the fact that the voice actors recorded their dialogue together in one room – a rarity in feature film animation. As the burnt-out, but wise teacher, Geek, and his stubborn pupil, Cody, Bridges and LaBeouf respectively add solid dramatic weight and traction to the characters’ relationship with their voice performances. Each actor brings both gentle sarcasm and humor to their roles, but they both know when to add a somber touch when the story calls for it.

As for the rest of the cast: Jon Heder manages to seem fresh, although even here he is pretty much playing the same kind of goofy dude part he’s been repeatedly playing for the last three years. Zooey Deschanel is always a nice presence – somehow managing to add a touch of sweetness to any film in which she appears. James Woods is shrill and his character, Reggie Belafonte, is way more annoying than he needs to be.

The aforementioned surfing scenes are surprisingly good – a testament to how supernaturally skilled these programmers, software guys, and animators who make computer-animated films are. That they make the surfing look so good with penguins on the surf boards adds to the amazement.

Posted by Leroy Douresseaux at 2:49 PM