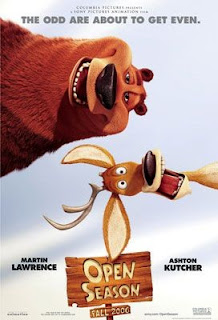 Open Season is Sony Pictures Animation’s first computer-animated (or 3D animation) feature film. This fish-out-water, reluctant buddy movie is a likeable story, but the animation is truly the star here.

Boog (Martin Lawrence), a domesticated grizzly bear, lives the good life in the tranquil town of Timberline with his kindhearted surrogate mother, Beth (Debra Messing), who rescued Boog when he was a cub. One day, Boog rescues Eliot (Ashton Kutcher), a mule deer with one antler missing, from the clutches of Shaw (Gary Sinise), the local law breaking, fanatical hunter. Eliot follows Boog home to his cushy digs where he lives with Beth, but this reluctant new friendship lands Boog in a lot of trouble. Before he knows it, Boog is left out in the wild, completely unprepared to live in the real world. Suddenly Boog and Eliot are forced into a partnership, and they have to survive the start of open season or they and all the forest animals may end up mounted on some hunter’s wall.

With 2006 being a busy year for 3D animated films, Open Season stands out for two reasons. First, the voice performances are very good, in particular Martin Lawrence, Ashton Kutcher, and Gary Sinise. Lawrence mixes gruff charm, a slight ego, and a genial self-effacing attitude that makes Boog come across as a sort of everyman who is simply looking to enjoy his comfy life without making too many waves. Kutcher’s Eliot is the classic manic funnyman who is always in trouble and manages to drag an unsuspecting stranger down with him. Sinise’s Shaw is a great comic villain, and he gives a fine performance by making his recognizable voice unrecognizable.

The animation is very good, and immediately had my attention. The character motion is fluid, and the movement of objects within the sets (car chases, floods, battle scenes, etc.) is spectacular. Sony Pictures Animation manages to duplicate the “squash and stretch” effect (think classic Looney Tunes and MGM cartoon shorts) of DreamWorks’ Madagascar with the kind of lush colors Pixar delivers in films like Finding Nemo and Cars. The characters are rubbery and flexible, and that adds to the comedy, especially in big action scenes (like the “dam break” and the battle between the forest animals and hunters). Open Season’s color palette perfectly recreates a lush autumn forest and the comforting earth tones of the great outdoors.

Open Season makes the buddy action comedy seem new by setting it as a delightful animal fable with lots of sassy banter and gentle innuendo. The animation captures the eye because it imitates the best of earlier 3D cartoon features, but also manages to be its own new thing. The characters are endearing, and Boog and Eliot make an excellent animation comedy pair, but this beautiful animation with its idiosyncratic visual style is something to remember.