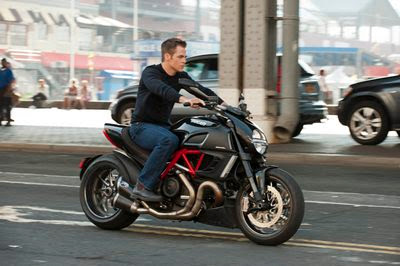 (Photo by David Lee of Chris Pine from the set of "Jack Ryan." (c) 2012 Paramount Pictures. All Rights Reserved.)

Chris Pine plays young Jack Ryan, cruising the downtown streets of Manhattan for JACK RYAN, from Paramount Pictures and Skydance Productions. The Prequel will be out Christmas Day 2013.

I did not know that Paramont had put into production another Jack Ryan movie.  The character, which was created by novelist Tom Clancy, has appeared in the films Hunt for Red October (played by Alec Baldwin), Patriot Games and Clear and Present Danger (played by Harrison Ford), and Sum of All Fears (played by Ben Affleck).  Now, comes a prequel to all those stories with Chris Pine as a strapping young Ryan.

Posted by Leroy Douresseaux at 9:00 AM