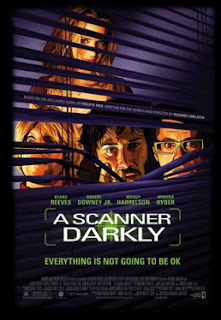 The subject of this movie review is A Scanner Darkly, a 2006 science fiction thriller and animated film from director Richard Linklater. The film is based on the 1977 Philip K. Dick novel of the same title, and George Clooney and Steven Soderbergh are among its executive producers.

In a future world (“7 years from now” the movie tells us) where drug addiction is rampant, law enforcement will do anything to catch dealers and their suppliers – even turn one of their own into an addict. Fred (Keanu Reeves) is an undercover agent who spies on (or “scans”) a drug addict and dealer named Bob Arctor (Keanu Reeves). Through this assignment Fred becomes hooked on Substance D, a hallucinogenic drug that is as destructive as meth is in our own times. However, this tale has a twist on reality for us. Fred is also Bob. Fred finds his sanity splintered as he deals with his duplicitous law enforcement superiors, and, as Bob, with the two addicts who are his housemates: the shaggy dopester, Ernie Luckman (Woody Harrelson), and the conniving James Barris (Robert Downey, Jr.). Barris turns stool pigeon and joins Fred and his superiors in a complicated scheme to catch Bob and tear down Bob’s drug operation. Meanwhile, Bob has fallen in love with another addict, Donna Hawthorne (Winona Ryder), but there may be more to her than meets the eye.

Richard Linklater’s trippy sci-fi film, A Scanner Darkly, is an animated film, but not the kind we usually think of (Disney, Pixar, DreamWorks, Warner Bros., etc.). For this movie, Linklater shot live-action footage of his cast and the sets. Animators then took that footage and painstakingly drew and painted over it – a process known as “interpolated rotoscoping” or simply “rotoscoping.” There was some rotoscoping in early Disney animated features, possibly Snow White and the Seven Dwarves (the animators animated Snow White by drawing her over footage of a live actress). Linklater used this process in his 2001 experimental film, Waking Life. Here, it’s like watching a film in which the characters, objects, places, and settings are all shifting liquids – living paint-by-numbers pastels.

As for the quality of the rotoscoping in A Scanner Darkly on the performances, the cast largely looks like themselves, and the audience will certainly recognize the bigger names here: Keanu Reeves, Robert Downey, Jr., and Woody Harrelson. Only Winona Ryder seems less like herself, at least until the end, and that may have been a deliberate choice on the part of Linklater. The technique serves the actors quiet well. They seem lively and free to be someone other than their famous selves, even Reeves who can be a bit stiff. It’s the kind of freedom that comes from wearing a masking, and in a sense, knowing that film recording of your performance will be painted over is like acting with a mask.

As for the narrative, A Scanner Darkly is trippy, but Linklater has captured the paranoia and schizophrenia of Dick’s work on screen like no one has ever done before. That’s saying a lot considering that Dick’s short stories have become films such as Total Recall, Minority Report, and Paycheck, and one of his novels became the film, Blade Runner. Published in 1977, Dick’s novel is a sci-fi allegorical recount of his drug experiences going back to the 1960’s, and it’s one of his most beloved works. I’m happy that Linklater was able to make his own film while retaining so much of PKD’s lunacy.

Here, it’s fun to wonder who is really who and if what’s going on is “real” or just drug-induced fantasies or simply paranoia. Linklater adds a counter-culture, post-millennium vibe all his own. The narrative gets a bit soft and slow in the middle and at the beginning of the last act, but otherwise Linklater’s experiment reaches for perfection. This is like watching his classic mid-90’s flick, Dazed and Confused with a David Lynch remix and backbeats from Requiem for a Dream. Occasionally maddening, sometimes confusing, rarely stupefying, A Scanner Darkly is an experimentalist art film that succeeds on the very path the filmmaker set for it.