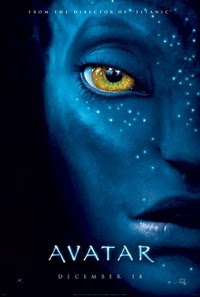 SCI-FI/FANTASY/ACTION/ADVENTURE/DRAMA/WAR with elements or romance

Because he has directed such Oscar-winning films as The Abyss (1989), Terminator 2: Judgment Day (1991), and Titanic (1997), I believe that James Cameron is one of the few directors who, using whatever advances in film technology available, can make any kind of movie and always make it a good movie. [Steven Spielberg and Peter Jackson are the other two.] Cameron has even developed advancements in film technology, and that makes me wonder if anyone other than he could have created the new film, Avatar.

Avatar is everything good that you have heard about it and more. Cameron has cast a titanic spell of movie magic that will immerse the viewer in an adventure that pits eco-harmonious blue warriors against a mechanized, imperial war machine. The center of Avatar, however, is a surprisingly simply story about an alien warrior who fights not for his own world, but for the world of the woman he loves.

Avatar takes place in 2154, a time when Earth has run out of oil. A moon called Pandora (one of many moons orbiting a giant gas planet) has a rare mineral called Unobtainium, which is the key to solving Earth’s energy problems. This alien world materializes through the eyes of Jake Sully (Sam Worthington), a paraplegic former Marine. Even with his body broken and being confined to a wheelchair, Jake’s DNA makes him useful.

The RDA corporation recruits Jake to travel light years to the human outpost on Pandora, where it is mining Unobtainium. Because humans cannot breathe Pandora’s atmosphere, a group of scientists and researchers, led by Dr. Grace Augustine (Sigourney Weaver), have created the Avatar Program, in which human “drivers” have their consciousness linked to Avatars. An Avatar is a remotely-controlled biological body that can breathe the lethal air. These Avatars are genetically engineered hybrids of human DNA mixed with DNA from the natives of Pandora, a humanoid race called the Na'vi. The Na’vi are 10-feet tall, with tails, bones reinforced with naturally occurring carbon fiber, and bioluminescent blue skin. They live in Hometree, a gigantic tree that sits on top of the largest deposit of Unobtainium on Pandora. RDA Administrator Parker Selfridge (Giovanni Ribisi) wants the Na’vi to relocate, but they have fiercely resisted.

Reborn in his Avatar form, Jake can walk again. He is given a mission to infiltrate the Na'vi. A beautiful Na'vi female, Neytiri (Zoe Saldana), saves Jake’s life and also witnesses a sign that makes her think that Jake is special. Neytiri convinces her clan to take Jake into the tribe, the Omaticaya. However, the chief charges Neytiri with teaching Jake to become one of them, which involves many tests and adventures. Jake’s relationship with his reluctant teacher deepens, and he learns to respect the Na'vi’s way of life. When Selfridge becomes impatient and moves to force the Na’vi out, Jake must decide whose side he will take.

Watching Avatar, with its world of phantasmagorical creatures and plants, one cannot help but marvel at the technology used to create this film, but the audience shouldn’t be fooled by this panorama of color and movement into focusing solely on the marvels of scientific cinema. Avatar is indeed an extraordinary story, one that recalls Kevin Costner’s Dances with Wolves. In Wolves, a solider wounded in spirit finds healing amongst a Native American Indian tribe, and then sheds his skin (his military uniform), becoming one of the tribe. In Avatar, a marine wounded in body, Sam Worthington’s Jake Sully, sheds his body for a new one, but it is his soul that is transformed.

Like Dances with Wolves, Avatar has a romance that is the heart of the story. Behind the CGI that created so many of the things we see on screen and past the motion-capture and performance capture that created the Na’vi, Jake Sully meets Zoe Saldana’s Neytiri and practically everything that is Avatar hinges on their love story. The narrative offers messages in support of environmental conservation and biodiversity against the cold, insatiable hunger of imperialism. This gives Avatar plenty of dramatic conflict, but as usual, Cameron finds the human center of his own technological, cinematic spectaculars. There was the mother-daughter bond in Aliens and the star-crossed lovers of Titanic. Now, warrior boy meets sexy tribal princess and technical virtuosity has a heart. Cameron makes you feel what his characters feel – the joy, the anger, the sorrow, the chills, and, when the battle begins, all the thrills. Avatar may be a monumental achievement, but it is also a fantastic tale.