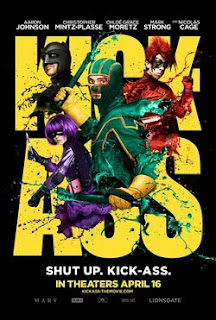 The film, Kick Ass, is based upon Kick-Ass, an eight-issue comic book series from writer Mark Millar (the creator of Wanted) and John Romita, Jr. The comic book, filled with violent imagery, profanity, racism, and misogyny (among many controversial elements) is utterly deranged, but hugely entertaining. Kick Ass the movie isn’t as deranged as it thinks it is, nor is it as entertaining as its source material.

The film follows Dave Lizewski (Aaron Johnson), a high school student/geek and comic-book fanboy. Dave has been thinking about taking his obsession with comic books and making it real by become a real-life superhero. He chooses “Kick-Ass” as his superhero name and transforms a green wetsuit with yellow stripes into his costume. Dave has absolutely no superpowers, however, and the first time he tries to fight crime turns into a disaster.

Dave’s continued activities bring him into contact with another pair of real-life superheroes, a father-daughter team who are more costumed vigilantes than superheroes. Eleven-year-old Hit Girl (Chloë Grace Moretz), who seems inhumanely good with bladed weapons, and her father, the Batman-like Big Daddy (Nicolas Cage), are waging war on Frank D’Amico (Mark Strong), a local drug kingpin. And Kick-Ass gets dragged into the blood and mayhem.

Directed by Matthew Vaughn and co-written by Vaughn and Jane Goldman, Kick Ass makes some nice changes to the original comic book (such as the reasons for Big Daddy’s campaign). Still, the movie is awkward, mainly because the narrative oscillates between two storylines: (1) Dave Lizewski’s adventures as Kick-Ass and (2) Big Daddy and Hit Girl’s war against Frank D’Amico. The action focusing on Big Daddy and Hit Girl is far more interesting than the adventures of Kick-Ass.

In fact, Dave and his friends just aren’t that interesting. They’re all stock characters, and Vaughn and Goldman aren’t able to inject anything into them that would make them worthy following. The only time Dave’s story is interesting is when he is with a new superhero calling himself Red Mist (Christopher Mintz-Plasse) or with Big Daddy and Hit Girl. Big Daddy and Hit Girl, especially the latter, are such fun that I wish they were the title characters. They even have the best adversaries in Frank D’Amico, a crime boss with great screen presence, and his gleefully malevolent underlings.

Kick Ass isn’t bad; the story just pretends to love Kick-Ass, while making Big Daddy and Hit Girl so alluring. The comic book made the most of its loveable loser Dave Lizewski, but the movie makes him nondescript in a story that is ostensibly about him. For all its wanton violence, foul language, and sexual content, Kick Ass is comical when it wants to be subversive. It is worth watching if only to wish we could see more Hit Girl in action.