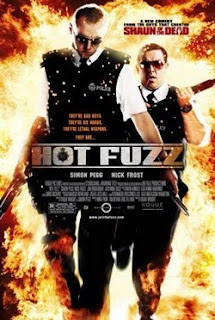 The director/co-writer (Edgar Wright), co-writer/star (Simon Pegg), and co-star/sidekick (Nick Frost) of Shaun of the Dead return in Hot Fuzz, a send up of America cop movies, with a British twist.

Nicholas Angel (Simon Pegg), the finest police officer in London, has an arrest record 400% higher than any other officer on the force. Because that makes everyone else look bad, Angel's superiors transfer him to the sleepy, seemingly crime-free village of Sandford. There, he is partnered with the well-meaning but overeager police officer PC Danny Butterman (Nick Frost), who is also the son of Sandford’s amiable police chief, Inspector Frank Butterman (Jim Broadbent).

Danny is a huge action movie fan and craves the kind of action he sees in his beloved American action movies – two of his favorites being Bad Boys II and Point Break. Danny is hoping that his new big-city partner might just be a real-life “bad boy,” and that Nick Angel will help him experience the life of gunfights and car chases for which he's longed. While Nick is dismissing Danny's childish fantasies, a series of grisly accidents rocks the village, convincing Nick that Sandford is not the peaceful paradise it at first seems. As the mystery deepens, Nick may be able to make Danny's dreams of explosive, high-octane, car-chasing, gun-fighting, all-out action a reality, but it may come at a high cost for both men.

As comedies go, Hot Fuzz is a pretty special movie, primarily because, outside of comic horror movies, this is one of the few instances that a film uses graphic violence and gore in a way that is so clever and hilarious. In fact, Hot Fuzz is a beautiful send up of the American high octane action flick, and the film is so disarming. It’s not just disarmingly funny, but the entire thing is beguiling in the way droll British humor and dry wit can be. Yet, Hot Fuzz is as relentless funny and subtly manic as any joke-a-minute American gross-out comedy.

Simon Pegg is terrific as the tightly wound professional police service officer, and Nick Frost is brilliant as the sweetly naïve Butterman. They are, however, just the tip of the iceberg in a film made of superb and witty supporting performances constructed from a good script and directing that, for the most part, hits the right notes. The film falters here and there and has several noticeable extended dry stretches, but at its heart, Hot Fuzz is delicious lunacy and outrageousness in the service of a good cause – comedy.