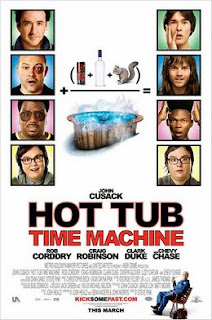 Hot Tub Time Machine is a raunchy, time-traveling comedy that opened in theatres this past March. The film has a ridiculous premise, but it sure is funny.

The movie presents a group of best friends have become bored with their adult lives and who have now mostly drifted apart. The self-absorbed Adam (John Cusack) has just been dumped by his girlfriend, and now his only companion is his nephew, Jacob (Clark Duke), his sister’s son who is obsessed with video games. Lou (Rob Corddry) is the party guy and an alcoholic abandoned by family and friends. Nick Webber-Agnew (Craig Robinson) was once Nick Webber, a young guy who dreamed of making it in the music business. Now, he has a dead-end job at a dog spa, and his wife Courtney Agnew-Webber (Kellee Stewart) controls his every move.

After Lou has an accident-that-looks-like-a-suicide-attempt, Adam and Nick (with Jacob tagging along) take him to Kodiak Valley Ski Resort, the scene of many memorable weekends when they were young. The resort has fallen on hard times, and the only thing worth enjoying is the ski resort hot tub. After a night of drinking, however, the men wake up to discover that they are now in the year 1986 because they fell asleep in the hot tub time machine. Adam, Lou, and Nick have a chance to relive this pivotal moment in their lives, but changing even the slightest thing could mean disaster for everybody.

One of the things that stand out about Hot Tub Time Machine is how surprisingly good the ensemble cast is. Craig Robinson, with his deadpan delivery, wit, and comic timing, is as good as any other comic actor working in movies and television today. But the best here is Rob Corddry. As Lou, he’s a beast – a freaking, free-spirited beast of comedy and belly laughs. Playing Lou requires Corddry to bare his ass and to also bare his soul at the most inappropriate times, which Corddry does with ease.

The screenwriters of Hot Tub Time Machine mix different movie genres and formulas to create the movie. Hot Tub Time Machine is part arrested-development movie, like Old School, which finds 30-something men rediscovering their college-age years with mixed results. It is a time when they could drink and carouse without having to worry about adult responsibilities like holding a job, supporting a family, and paying bills. Like Wedding Crashers or The Hangover, this is also very guy-centric, with women acting merely as objects by which the guys can validate, redeem, or sexually relieve themselves.

Hot Tub Time Machine is also like those raunchy, teen sex comedies of the 1980s, and particularly resembles the 1984 ski comedy, Hot Dog…The Movie. Hot Tub presents a scenario in which the lead characters can alter the past via time travel – a familiar movie chestnut used in comedies like Groundhog Day and 13 Going on 30.

What makes Hot Tub Time Machine different is that Adam, Lou, Nick, and Jacob are not transformed into brand new, shiny good guys by the end of this film. They practically remain the same self-absorbed losers looking for self-gratification. In Old School, after regressing to immaturity and sewing their no-longer-wild oats, the guys go back to being upright citizens by movie’s end. Here, the guys don’t “grow up;” they just get lucky.

Hot Tub Time Machine is all over the place and there isn’t much of a story. Still, it proudly puts its lovable losers through an obstacle course of vulgar antics, and the result is a movie that will make you laugh and howl. The title, Hot Tub Time Machine, alone promises crude, offensive humor, and thank heavens that it delivers.

Posted by Leroy Douresseaux at 6:53 PM