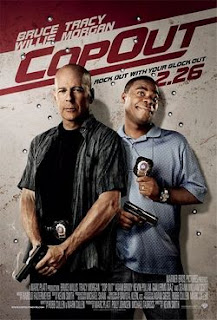 Cop Out focuses on James “Jimmy” Monroe (Bruce Willis) and Paul Hodges (Tracy Morgan), two longtime NYPD cops who have been partners for nine years. Their investigation of a drug ring goes bad when a bad-ass supplier named Juan Diaz (Cory Fernandez) shoots up a neighborhood and escapes. After getting suspended, Jimmy and Paul end up playing cops again after an eccentric thief named Dave (Seann William Scott) steals a rare, mint-condition baseball card that belongs to Jimmy. The hunt for the card leads them back to Juan Diaz and his older brother, Poh Boy (Guillermo Diaz), a merciless, baseball memorabilia-obsessed gangster. Poh Boy will return the card if Jimmy and Paul retrieve a stolen car, but it is what’s inside the car the changes everything.

In a way, Cop Out is an homage or send-up of 1980s buddy cop movies like 48 Hrs. and Lethal Weapon and also cop action comedies like the Beverly Hills Cop franchise. Even the musical score for Cop Out is composed by Harold Faltermeyer, who composed music for the first Beverly Hills Cop film and Top Gun. And Cop Out works… in a sort of off-kilter way. Kevin Smith, whose films are often steeped in pop culture, creates the right mood and squeezes all the right essences and flavors from his cast and from this story until he has a 1980s throwback cop action/comedy that is thoroughly entertaining.

I find Bruce Willis to be so cool, and his resourceful, tough guy screen persona is pitch-perfect to play a cop – even a cop in a peculiar comedy like Cop Out. Tracy Morgan isn’t just another black comedian. His act stays fresh because of his ability to freestyle peculiar and absurd behavior, mannerisms, and dialogue. That’s why he’s more shocking than annoying.

Cop Out’s screenplay does waste a few good characters: the oddly lovable Poh Boy, his delightfully evil brother, Juan Diaz, and the kooky thief Dave. There are some other characters in this story that should have been dropped from the screenplay in order to give this trio more screen time.

Anyway, Cop Out is not just another standard, idiotic, buddy cop movie. The unusual and peculiar pairing of Bruce Willis and Tracy Morgan, plus a few good supporting characters make this profanity-laden comedy a joy to watch over and over again. I wish for a sequel.