My Bloody Valentine Odd and Gruesome 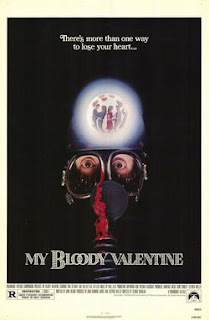 HORROR with elements of mystery

The film is set in the fictional mining town of Valentine Bluffs (actually shot in Sydney Mines, Nova Scotia), and the story begins February 12th, two days before Valentine’s Day. For the first time in 20 years, the town is going to have a Valentine’s Day dance. Once an annual tradition, the event was stopped 20 years earlier after a horrific methane gas explosion at the local Hanniger Coal Mine caused the tragic deaths of four workers. A fifth worker trapped in the mine, Harry Warden (Peter Cowper), became a crazed killer who cut out the hearts of his victims. Warden promised to kill the townsfolk if they ever held a Valentine’s celebration again.

Now, a local businesswoman has led the charge to celebrate Valentine’s Day again, but when murder victims with their hearts cut out start popping up, Police Chief Jake Newby (Don Francks) cancels the dance. On February 14th, however, a group of young miners and their girlfriends decide to have a party anyway – at the Hanniger Coal Mine! They are blissfully unaware that a mysterious killer, the Miner, who may or may not be Harry Warden, is stalking their every move and killing them one by one.

My Bloody Valentine is a surprisingly entertaining low-budget horror film. Having the killer use a pick-axe gives the gory murders an extra gruesome twist. It also does not hurt the movie by having Valentine’s Day as the killer’s holiday of choice, because that just adds to this movie’s peculiarity. Like many slasher movies, My Bloody Valentine is anemic on character development, but the late screenwriter John Beaird tweaked enough clichés and character types to keep things interesting – like the hot dog murder scene and the elderly woman who spearheads the party plans.

Sydney Mines, Nova Scotia, which stands in for Valentine Bluffs, gives the movie a really nice rustic atmosphere. The dusty, dreary, and rundown feel of the location is balanced by the young cast’s jaunty and carefree interpretations of their characters – an odd, but pleasing yin and yang. That may be why My Bloody Valentine deserves its cult status and why no slasher movie fan should miss it.

Posted by Leroy Douresseaux at 8:27 AM