The Simpsons Movie Brings the Groove Back - Sort of 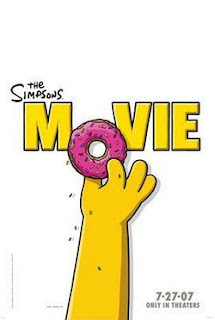 The Simpsons Movie is the long-awaited and long-promised big screen version of “The Simpsons,” the FOX television network’s long-running animated series (which has finished its 21st broadcast season as of this writing). The movie is not bad at all, and it is fun to see creator Matt Groening’s animated clan in a feature-length film. In fact, while it’s not great, it is certainly funnier and spicier than the TV series has been in recent years. Still, one would think that after a reported 158 rewrites of the screenplay, the film would have been funnier than it is.

The film begins with Lisa Simpson (Yeardley Smith) leading a charge to get Springfield Lake cleaned. Her father, Homer Simpson (Dan Castellaneta), however, does something that makes the lake highly toxic, which allows a conniving government official, Russ Cargill (Albert Brooks), to have a dome lowered over the entire city. Homer Simpson is used to alienating people, but the level of animosity he inspires after polluting the lake and inadvertently causing the city to be isolated is off the charts.

The residents of Springfield become a mob, and the Simpsons are forced to flee and take refuge in Alaska. Marge Simpson (Julie Kavner), however, is determined to return to her home, and that leads to a series of events that may finally force the best out of Homer. Meanwhile, Bart (Nancy Cartwright) had found a new father figure in neighbor Ned Flanders (Harry Shearer).

The Simpsons Movie was never going to be as bad as some thought it could be. There is just too much talent behind the franchise. Still, this movie may not be as good as some would want it to be. The first 30 minutes are quite good, full of the sparkling wit, sass, and bite that made the series so popular in the 1990s. The middle of the film (the Alaska segment) is woefully soft, and at times the narrative feels as if it is stuck in muddy hole. The last act turns the film sassy and funny again, with “The Simpsons’” own mixture of the intelligent and the moronic coming back into play.

The Simpsons Movie finishes off with a bang and may actually leave the viewer with a brief feeling of wanting more; at times, some moments of the film will cause hard laugher. Its candy-colored animation (much of it augmented by CGI) it true to the distinctive visual style of creator Matt Groening. In the pantheon of the best Simpson stories, The Simpsons Movie has a well-deserved place, even if that place isn’t as special as others.