Sam Worthington Puts the Smash in "Clash of the Titans" 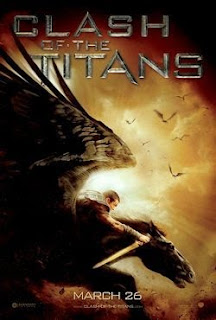 FANTASY/ACTION/THRILLER with elements of adventure

Released earlier this year, Clash of the Titans is a remake of the 1981 film of the same name. The original was a goofy, delightful, children’s adventure film and monster movie that featured the talents of film producer and special effects wizard, Ray Harryhausen. The 2010 version takes itself very seriously (way more seriously than the original), but is still a goofy fantasy adventure film and monster movie.

The story is set in a time that seems as if it will be the twilight of the Olympian gods, who gain their powers from the prayer, worship, and love humans give them. Humans, however, have been turning away from the gods. For instance, soldiers from the city of Argos destroy a massive statue of Zeus as their declaration of war against the gods. Hades (Ralph Fiennes), the master of the Underworld, convinces his brother, Zeus (Liam Neeson), the ruler of the Olympians, to allow him to punish Argos for the soldiers’ actions. Hades, who gains his power from human fear, threatens to unleash the monstrous Kraken on Argos unless King Kepheus (Vincent Rega) offers his beautiful daughter, Andromeda (Alexa Davalos), as a sacrifice.

In steps the hero. Raised by his foster father, the kindly fisherman, Spyros (Pete Postlethwaite), Perseus (Sam Worthington) is really a demigod – the son of Zeus and a human woman. After watching Hades kill Spyros, his foster mother, and foster sister, Perseus vows vengeance against him. When he discovers that by killing the Kraken he could strike at Hades, Perseus volunteers to lead a dangerous mission deep into forbidden worlds where he may discover a method to kill the Kraken. Kepheus’ Praetorian Guard follows Perseus, but head guard, Draco (Mads Mikkelsen), has grave doubts about Perseus, who insists that he will succeed as a man and not as a demigod. But the fate of his mission and his own survival may depend upon Perseus accepting his powers as a god.

Simply put, Clash of the Titans 2010 is mildly entertaining, but it does have some grand moments (like the battles against the Gorgon and the Kraken). Most of the time, however, it has an odd rhythm. There is no sense of urgency in the story and very little to indicate how imperative it is that the heroes successfully complete their mission in a short amount of time. Even Lord of the Rings, which is a trilogy composed of three movies, each running at over three hours in length, always feels like time is running out for the heroes. Conversely, quite a bit of Clash of the Titans’ first hour feels flat.

The special effects are either good or bad; there isn’t much in between. The Gorgon and especially the Kraken are really good. The visual effects and CGI used for Hades are embarrassingly weak; luckily, with minimal effort, the powerful Ralph Fiennes makes Hades the good villain that the effects could not.

Strangely, this film is packed with good characters and actors making the best of even small parts. Mads Mikkelsen is superb as Draco, leader of the Praetorian Guard; his performance will make you wish to see more of the character. As usual Sam Worthington is just fun to watch. There is no doubt that this movie would be a disaster without him. He could portray a fast food clerk at a drive-in window and make the role seem compelling.

Clash of the Titans often lacks drama, but the things about it that work well (Worthington, Mikkelsen, the Kraken, etc.) actually work quite well. This is a fun-in-its-own-way, wannabe epic, but it never seems overwrought. “Goofy” is a word that can describe it, but I would watch Clash of the Titans 2010 again and again – just as I do with the original 1981 film.

Posted by Leroy Douresseaux at 11:43 AM