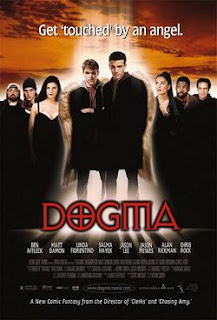 Bethany Sloane (Linda Fiorentino) is the last known descendant of Jesus Christ. Metatron the voice of God (Alan Rickman) sends her on a quest to stop two renegade angels from exploiting a loophole in Roman Catholic law to regain entry into heaven, an act that will cause existence to cease. Joining her on her quest are Jay (Jason Mewes) and Silent Bob (the director Kevin Smith), and the forgotten black 13th Apostle, Rufus (Chris Rock). The two angels, Bartleby (Ben Affleck) and Loki (Matt Damon), are encouraged in their destructive quest by a fallen angel/muse, Azrael (Jason Lee).

Directed by Kevin Smith (Clerks.), Dogma is meant to be satire of or, at least, poke fun, at Roman Catholic Dogma, and it succeeds at pointing out some of the Church’s eccentricities, although many of the complaints could be applied to Christianity in general, or most other faiths, for that matter. Dogma’s points are mostly complaints that one could hear from any armchair observer or frustrated Sunday mass-goer. The real pleasure of this film, and there are, surprisingly, many pleasures, is the execution of the film and raucous comedy.

Despite moments of long-winded and awkward soliloquies, the dialogue is pointed and funny. Often harsh and abrasive, it ranges from being hilarious and uproarious to smart and dead on in some of the film’s more opinionated moments. Dogma is an unusual film, a comedy that is very much steeped in the fantastique. However, its witty and ribald repartee engages the viewers and draws him through some of the film’s quirkier moments.

The acting is good from top bill to supporting cast, and they all manage to be quite convincing even when choking on mouthfuls of the verbose Smith’s dialogue. The characters Jay and Silent Bob are as funny as ever, and the make excellent sidekicks to the main players and story. Ms. Fiorentino makes a dramatic, but wry, turn as the downtrodden Bethany, she of shaky faith; she is surprisingly good although, at first glance, she seems an odd choice for a Kevin Smith film. Chris Rock also makes a rather nice appearance as Rufus; he manages to both be true to his shtick and to the film.

For all it’s fun, Dogma falls apart in the end. The last half hour’s violence is careless and special effects are not impressive seem a little cheap. Alanis Morissette’s appearance as God is the final straw in the film’s dismal closing chapter.

Oh, well. They almost had it. Watch Dogma for all its fun, especially if you’re familiar with Kevin Smith’s brand of comedy, but expect to pay for the fun with a poor ending.