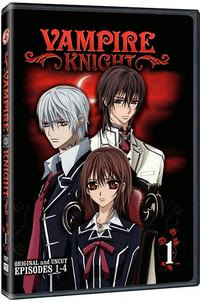 The recent DVD release, Vampire Knight, Vol. 1, presents four episodes of the Japanese animated series, Vampire Knight. This is a cool take on the vampire similar to such Young Adult literature vampire delights as the Twilight and Vampire Kisses series.

Vampire Knight is a manga (Japanese comics) written by manga artist Matsuri Hino. It was first published in January 2005 in the Japanese comics magazine, LaLa, and the series continues as of this writing. Vampire Knight, which is a shojo manga (comics for teen girls), received an English publication in 2006 via Shojo Beat magazine, and VIZ Media currently releases collected volumes of the series every few months.

The story focuses on Yuki Cross, the adopted daughter of Headmaster Cross. She partners with Zero Kiryu, a human student who struggles with the vampire’s thirst, and the two are the Guardians of the school, patrolling the hallways and school grounds to protect the Day Class students from the vampires. Yuki and Zero form a kind of love triangle with Kaname Kuran, a pure blood vampire who is basically the unquestioned leader of the Night Class. The series follows various intrigues related to the conflict between human and vampire, and the story also delves into the pasts of the three leads.

Japan’s Studio Deen adapted Vampire Knight into anime (Japanese animation), and the series debuted on Japanese television in the April 2008. The recent DVD release, Vampire Knight, Vol. 1 collects the first four episodes of Season One of the anime: #1 “Night of Vampires,” #2 “Memories of Blood,” #3 “The Fang of Penitence,” and #4 “Trigger of Condemnation.”

These episodes introduce the plot, setting, characters, and mythology of Vampire Knight in such an easy and friendly way. It will not be long into the first episode that the viewer will believe that she is well on her way to knowing and then loving these characters. The series favors the Night Class over the Day Class, which seems to exist to praise and worship the Night Class. The vampires are beautiful, sexy, and sassy; their air of confidence is infectious. The Day Class cast is mostly dull.

The star, of course, is Yuki Cross. In a series like Vampire Knight, what is needed is a character that is probably more nosy than curious and also brave enough to go where others won’t go. That will make viewers want to follow her quest and investigations, and Yuki will have the viewers hanging onto her. The two male interests, Zero Kiryu and the vampire Kaname Kuran, are also quite good. Their aloof, cocky natures are attractive, and if it is possible for an animated character to have a screen presence, they have that.

The quality of the animation is good. It emphasizes style and stylishness over movement and features vivid colors, lush background details, and elegant sets. This look is perfect for the gothic moodiness and romantic melodrama that defines the look of Vampire Knight.

Vampire Knight, Vol. 1 will reveal some secrets, expose Zero’s affliction, and give viewers a shocking look at a kind of vampire that isn’t a sexy, laid back student. While aimed at young women, Vampire Knight is a surprisingly engaging melodrama and will please anyone interested in soap operas – with vampires.

EXTRAS: This is a no frills DVD without any extras, although viewers are offered the option of watching episodes in Japanese with English subtitles or dubbed versions with voice actors providing English dialogue.

Posted by Leroy Douresseaux at 8:34 PM