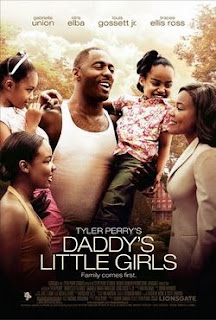 DRAMA/ROMANCE with elements of comedy

In the romantic drama, Daddy’s Little Girls, impresario Tyler Perry leaves behind Madea, the character that made him so rich and famous, and steps into the background to act as writer/director/co-producer. The film features a rarity in American film, the working class black father who is totally dedicated to his children, and with this subject matter, Perry makes his best film to date.

Working class dad and mechanic, Monty James (Idris Elba) suddenly finds himself in custody of his three daughters, Sierra (Sierra Aylina McClain), China (China Anna McClain), and Lauryn (Lauryn McClain). However, his ex-wife Jennifer (Tasha Smith) is challenging Monty for custody, but he can’t let her take the children because she lives with Joseph (Gary Sturgis), a dangerous mini-drug kingpin. He finds help and later love in Ivy League-educated attorney, Julia Rossmore (Gabrielle Union), but their class differences and Monty’s criminal record threaten to tear them apart, and perhaps, cost Monty his children.

What makes Daddy’s Little Girls Tyler Perry’s best film to date is the strong character writing. Perry takes much heat from African-American critics of both his stage and screen work for dabbling in stereotypes. What he actually uses are familiar character types to tell stories that are moral lessons and parable about family values, and his audience can identify with both characters and the messages behind the film. The way he works is quite sly. On the surface, his plays and films as bawdy, working-class comedies set in black communities (urban, suburban, or rural), but after he gives his audience several acts of rowdy comedy, he leaps into his messages about family, community, and God. In fact, his characters often find solace and healing through these three institutions.

In Daddy’s Little Girls, Perry leaps right into the drama. Poverty, dysfunctional families, terminal illness, urban crime, social injustice (particularly in the legal system), and class prejudice are all topics Perry uses to build the screenplay for this film, and it works. Daddy’s Little Girls is both entertaining and uplifting. Of all his films, this one, more than the others, is directed at his core audience of conservative, working class African-Americans. To mainstream (read: white) American audiences, this may seem like a foreign film, but many viewers from working class backgrounds should identify with this.

If this film has one glaring fault, it’s that the script doesn’t give enough time to the daddy and his little girls of Daddy’s Little Girls. The film is mostly about the developing relationship between Monty and Julia, for which Idris Elba and Gabrielle Union respectively give fine performances. Tasha Smith as the big bad mama, Jennifer, adds spice, and Louis Gossett, Jr. as Willie, brings refined acting to this delightful and heartwarming message movie.