Review: "Clerks" Was and Still Is the Real Deal 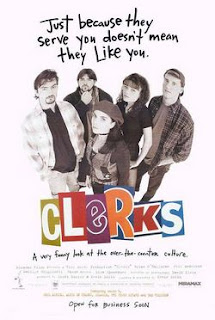 Dante Hicks (Brian O’Halloran) wasn’t even supposed to be at work today, but his boss called him to open the convenience store because the guy that was supposed to work called in sick. Going to work wouldn’t be so bad, if Dante hadn’t just finished a night shift, and he wasn’t dead tired. And, God, he hates the customers.

Kevin Smith’s Clerks. is the story of Dante and Randal Graves (Jeff Anderson), two loser, nowhere-bound clerks, Dante in a convenience story and Randal in a video store next door. The film focuses on a day in their lives when Dante feuds with his girlfriend Veronica (Marilyn Ghigliotti) and obsesses over his old squeeze, Caitlin (Lisa Spoonhauser), and Dante and Randal deal with fines, customer hassles, a visit to a wake that goes badly, and dead customers. If that wasn’t crazy enough, Jay (Jason Mewes) and Silent Bob (Kevin Smith), two eccentric drug dealers, hang around outside all day.

Clerks. made Kevin Smith a cult favorite director and is probably his most beloved film. For anyone who has ever held a low-paying job as a clerk at a small business, Clerks. is the visual Bible of wage earner suffering. The film’s extremely low-budget look (it was allegedly shot for under $30,000) isn’t off-putting, but adds a sense of verisimilitude to the film. The acting (mostly made up of local theatre talent and friends of the filmmakers) ranges from sub-par to good, but what makes this film is the dialogue.

While Smith often gives his cast more than a mouthful to say, his dialogue is witty, subversive, real, sassy, philosophical, and hilariously outrageous. Add that to some brilliant key moments in the film, and Clerks. is a comedy that may not speak to everyone, but this radiant delight speaks loudly to some of us.