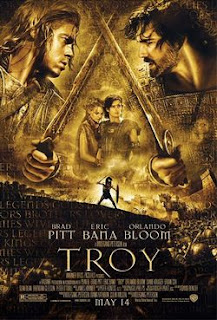 ACTION/DRAMA/HISTORICAL/WAR with elements of adventure and romance

Paris of Troy (Orlando Bloom) steals Helen (Diane Kruger), the wife of the Spartan King, Menelaus (Brendan Gleeson). Agamemnon (Brian Cox), Menelaus’ brother and the king who united the varied Greek kingdoms, suddenly has a reason to invade Troy. Paris’ brother, Hector (Eric Bana) stands ready to defend his kingdom, but that means he may have to face the greatest warrior the world will ever known, Achilles (Brad Pitt). This old tale gets a retelling in Warner Bros.’ Troy.

Anyone who is familiar with the legend of Troy from Homer’s epic poem, The Iliad (or Virgil’s The Aeneid) or countless retellings, documentaries, history lessons, etc. will already know how this film ends. But trust Hollywood to make just enough changes to surprise or, at least, infuriate purists. In my case, I was deeply troubled by a number of issues (especially the absence of the manipulations of the quarrelling Greek gods’ who played a large role in the literary story of Troy), but it wasn’t enough to keep me from enjoying this movie.

Director Wolfgang Petersen’s Troy is an epic war story that is equal parts costume drama and big budget, Hollywood historical epic. It’s goofy, but serious enough to past muster. The dialogue is wooden and stiff, and the speeches will sometimes make you cringe. However, there are enough times when the characters speak with equal measure of weight and pomposity and clarity to sell the story. And at the end of the day, this movie is just fun to watch.

Like those historical epics of the 1950’s and 60’s, Troy has some secret allure to it. For some reason, these crazy dramas, with their high fallutin’ faux Shakesperean-lite speeches, are entertaining. Of course, there are always the battles, and Petersen (another very talented film director who has an impressive filmography of entertaining macho movies) stages the slugfests and bloodshed with brilliance. Granted, I’ve seen the massing of large fleets and armies on the big screen before Troy, but Petersen also smartly focuses on individual, man on man fight scenes, especially those with Achilles.

Regardless of what one might think, there’s no way you cannot not treat yourself to the sight of Brad Pitt throwing it down Greek thug style. I loved his fight scenes, and while he may not be the world’s greatest actor, he may be one of the most sincere. He looks great on screen, and the camera loves him. Pitt throws himself into the role of Achilles with such relish that I can’t help but be awed by him. And no matter what others might say, he more than holds his own in a really nice scene he has with Peter O’Toole. Yes, he may not be the greatest actor, but he’s one of the great movies stars, and he’s a better actor than for which he’s given credit. For him alone, I recommend Troy.