Meet the Barnes in "Death at a Funeral" 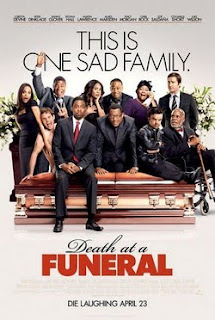 The recent Chris Rock-Martin Lawrence film, Death at a Funeral, is a remake of a 2007 British film of the same name. This black comedy (or dark comedy) observes a family as its members come together to mourn a beloved husband and father, even as shocking revelations and festering resentments arise.

The elder son, Aaron Barnes (Chris Rock), is managing the funeral of his recently deceased father. Aaron is also preparing to move on with his life, which includes moving him and his wife, Michelle (Regina King), out of his parents’ house, especially because his mother, Cynthia Barnes (Loretta Devine), keeps reminding them that they haven’t given her any grandchildren. Aaron is hoping that his younger brother, Ryan (Martin Lawrence), a successful author, will help him cover the funeral expenses, but the late-arriving Ryan claims temporary financial hardship.

Meanwhile, relatives are arriving, bringing their baggage and family feuds with them. Oh, and a stranger named Frank (Peter Dinklage), who claims to have been a close friend of the deceased, has come bearing secrets.

So much of Death at a Funeral is in very bad taste, but that is also why the film is so funny. With its missing and abused corpses, fecal humor, nudity, and unabashed raunchiness, Death at a Funeral is only a stylized and slightly-exaggerated depiction of how problematical family get-togethers, even funerals, can be. Director Neil LaBute also does a mostly good job keeping things hopping by unveiling one outrage after another, so that the audience can never really catch its breath before the next indignity comes along.

The main problem with this movie is that I don’t think the headliners for this film, Chris Rock and Martin Lawrence, are really suited for large ensembles. They’ve certainly been part of smaller, star-driven ensembles (Lawrence in Wild Hogs and Rock in the recent Grown Ups), but both are at their best when the entire movie is built around them. Here, they have to share too much screen time.

My quibble isn’t the fault of the writing because screenwriter Dean Craig (who wrote the original film) has done a superb job creating so many engaging, three-dimensional characters. It is simply that they all deserve more screen time than they get. Most of them are such fun that their short time on screen comes across as a shortcoming on the part of the entire movie. Still, this movie is funny, and maybe also useful to the viewers. The next time you need an antidote to a painful family social event, Death at a Funeral is a reminder that there is laughter even in the most trouble-filled family gatherings.

Posted by Leroy Douresseaux at 11:20 AM