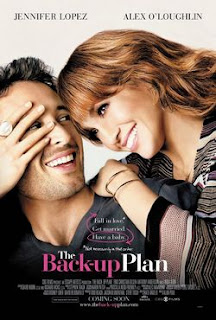 When the Jennifer Lopez romantic comedy, The Back-up Plan, opened in theatres back in April, I remember a few critics and commentators expressing the opinion that Lopez was too old to star in a romantic comedy. Of course, that is ridiculous… kind of. At 41-years-old (as of this writing), Lopez shouldn’t be playing ditzy 20-somethings who just can’t find Mr. Right.

The Back-up Plan, however, isn’t She’s All That or The Prince and Me, films in which the actresses playing the love interests were in their early 20s. Age of the actress shouldn’t be the issue. The issue should be the quality of the film, which is where The Back-up Plan has problems.

The movie is about Zoe (Jennifer Lopez), who after years of fruitless dating, has decided waiting for the right man is taking too long. Determined to become a mother, Zoe commits to a plan: to conceive a child through artificial insemination and goes through with it. That same day, Zoe meets Stan (Alex O’Loughlin), and though he annoys her at first, Stan starts to seem like a man with real possibilities. Zoe hopes that she does not become pregnant by the anonymous donor’s sperm just when she is finally meeting a guy with promise. However, when she learns that she is pregnant, Zoe has to come up with a back-up plan and hope Stan sticks around.

Part of The Back-up Plan is actually quite edgy. The script is pretty blunt about the dating game, pregnancy, and how having children can change a person’s life in ways that are beautiful and in ways that just drive a person freaking nuts. This movie is also frank about the not-so-pretty, bodily fluids part of conceiving, carrying, and birthing children. There is a birth scene in the second act that is gross and outrageous enough to be mesmerizing; it is a scene as good as anything in the Wedding Crashers and The Hangover.

Unfortunately, much of the movie, including the first hour, tries mightily to be a standard romance comedy and mostly falters or outright fails. It is as if everyone involved never realized that the edgy, gross stuff is what really resonates in this unconventional tale about two people whose relationships with the opposite sex are greatly affected by past traumas.

There is no point in talking about the acting, which is fairly good, because that is not what is frustrating about The Back-up Plan. The better part of this movie is that it is different, but the worse part is that it tries to be something it is not – a fluffy, childish romantic comedy full of giggles and silliness. The good stuff is worth seeing, and some viewers may even enjoy seeing potential keep shooting itself in the foot.

Posted by Leroy Douresseaux at 2:19 PM