The First Hulk Movie: I Like it More Now Than When I Wrote This Review 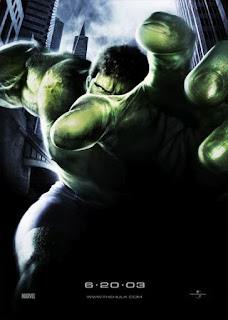 The subject of this movie review is The Hulk, a 2003 superhero science fiction and action movie from director, Ang Lee. The film stars the Hulk, a Marvel comics superhero character created by Jack Kirby and Stan Lee and first appeared in The Incredible Hulk #1 (May 1962). The film explores the origins of the Hulk.

So is The Hulk a good movie, you might ask? And my answer is simply “no.” The film doesn’t even cut it as a second-rate summer thriller. This is not a joy ride. It’s a ponderous, lumbering…well, lumbering hulk of a picture, full of sound and fury signifying nothing – nothing on the screen and nothing left in the space in your wallet where that money was you spent to see this junk. There are a few good moments, emphasis on “few.”

The story goes thusly. Bruce Banner (Eric Bana) and his on-again/off-again girlfriend/scientist Betty Ross (Jennifer Connelly) are scientists working on a method of using nano-technology to cure injuries. Banner and Ross use gamma radiation to activate their so-called nanomeds once they’re inside the injured test subject, but one day Bruce is accidentally exposed to the gamma rays. To make things worse, Bruce is the byproduct of his father David’s (Nick Nolte’s) bizarre experiments when he was a child.

Combine the radiation with whatever weird crap Bruce’s father put in him and whenever Bruce gets mad (you won’t like him when he’s mad), he becomes the behemoth force of nature, The Hulk, a big green brute with a muscular body cut along lines any bodybuilder would kill for eight days a week. Of course, there’s the obligatory greedy scientist, Talbot (Josh Lucas), who wants to study the Hulk DNA for possible military applications. Talbot is also Bruce’s rival for some of Betty’s booty. And one more thing, Betty’s father General Ross (Sam Elliot) has to hunt the Hulk – keep it in the family.

Director Ang Lee and his cinematographer Frederick Elmes from Lee’s great film, The Ice Storm, turn the film’s photography into a series of kinetic moving pictures. They happily cut and divide the screen into multiple pictures and frames that mimic the panel grid of a comic book; sometimes the movie looks like a photo album or a photo collage. At best this is purely superficial, adding nothing to the story.

The most ironic thing about The Hulk is the tagline, “You wouldn’t like me when I angry.” It’s quite the opposite. The only time we really like the Banner character is when he is the Hulk. That’s the only time this morose, sullen, humorless picture has any life. Lee literally buries his film in the rubble of boring psychological struggles amongst the characters, in particular between the Banners. I was literally climbing the walls of the theatre. No one gives a damn about Banner’s evil daddy! Show us the Hulk. Lee races through scenes of The Hulk madly and wildly destroying his environment almost as if he were embarrassed to be making a monster movie. It’s as if actually showing a rampaging CGI Hulk is an unpleasant thing Lee had to do to appease his studio; then, it’s back to the real people and their mental and emotional baggage.

Dammit, we came to get down on some mindless fun. Who’s gonna like this? The kids? Hell, no. Even adults are going to be bored. If we wanted this much therapeutic confession and angst, we’d rent a Woody Allen movie. The Hulk comic book concept was a metaphor about the inherent and potential dangers of the atom bomb, not about bad daddies and emotionally distant sons. It’s like going to see an Austin Powers' film and discovering that Freud’s really the star this time.

I’ve seen three of Ang Lee’s films (Sense and Sensibility, The Ice Storm, Crouching Tiger, Hidden Dragon), and they were brilliant. This effort is beneath him. I can’t believe that the director who had so much fun with Crouching Tiger couldn’t have fun with The Hulk. Even the effects are only okay, but in an age when the SFX is supposed to “blow you away,” the Hulk effects just blow. The most interesting and exciting scene isn’t until the end of the film, and the final battle is so beyond being ridiculous that I’m not articulate enough to tell you just how lame it is. I can understand Lee’s desire to do a big budget, Hollywood, effects extravaganza, but that doesn’t mean he should let the film do him.