Lean "Haywire" is Hard and Mean 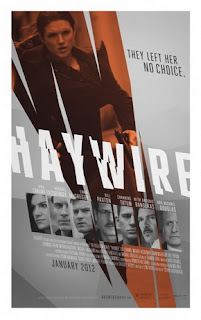 Haywire is a 2011 action movie and espionage thriller from director Steven Soderbergh. Released in the United States earlier this year, Haywire focuses on a female secret operative who must go rogue in order to stay alive.

Mallory Kane (Gina Carano) works for a private firm employed by the American government to perform covert operations. Kenneth (Ewan McGregor) is the firm’s director and, until recently, he was Mallory’s boyfriend. He sends Mallory and a team to Barcelona, Spain to rescue Jiang (Anthony Brandon Wong), a Chinese national being held hostage. After the mission, things go haywire. Mallory goes on the run with Scott (Michael Angarano), a young man she meets at a restaurant. Aaron (Channing Tatum), a member of her team, is pursuing her. Now, she must outwit her pursuers on both sides of the Atlantic if she is going to outlast them and discover who betrayed her.

Although he didn’t write the script, Haywire is a definitely a Steven Soderbergh movie, as he not only directed it, but also photographed it (under the name Peter Andrews) and edited it (under the name Mary Ann Bernard). The film is fast and spare, unlike the extravagant norm of many Hollywood spy and espionage thrillers and action movies. Haywire skewers closer to reality, from the gritty hand to hand combat to Gina Carano’s body and facial features. Mallory Kane looks like a woman who has really served in the military and is trained to do security and covert ops work.

However, there is much about this movie that is flat. There is too much impersonal dialogue and delivery between the characters, and the few scenes of intimacy and personal relationships come across as phony. Much of the cast is underutilized. There isn’t enough of the fantastic Michael Fassbender, and Bill Paxton as John Kane, Mallory’s father, looks as if he is chomping at the bit to do more in this movie.

Still, Haywire is a nice anecdote to the overcooked action, post-human cinema tech, and computer-generated effects that dominate most of the action thrillers now splashed across American movie theatre screens. I like the rough-and-ready Mallory Kane that actress Gina Carano creates. I want more of her, especially if Soderbergh would direct a hypothetical sequel. Haywire is a lean, mean, fighting machine, a breath of fresh air in Hollywood kick-ass cinema.