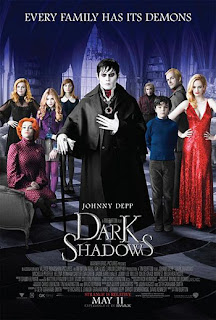 Dark Shadows is a 2012 gothic horror and comedy fantasy film from director Tim Burton and starring Johnny Depp. The film is based upon Dark Shadows, a gothic horror soap opera that was created by Dan Curtis and was originally broadcast from 1966 to 1971 on ABC. Dark Shadows the film follows a vampire who returns to his ancestral home, after two centuries of imprisonment, and finds his dysfunctional descendants in need of help.

Dark Shadows begins in the mid-1700s where we meet Joshua and Naomi Collins and their young son, Barnabas, as they sail from Liverpool, England to start a new life in America. Joshua builds a fishing empire in Maine at a town he names Collinsport. Barnabas Collins (Johnny Depp) grows into a wealthy playboy, who loves and leaves numerous women. His biggest mistake is to spurn the love of Angelique Bouchard (Eva Green), because she is a witch. Angelique puts a curse on Barnabus, turning him into a vampire, and then, has him buried alive.

Nearly 200 years later, Barnabas is inadvertently freed from his tomb into the very changed world of 1972. Returning to his family’s estate, Collinwood Manor, Barnabas finds that his relatives are now dysfunctional and not as well off financially. Family matriarch, Elizabeth Collins Stoddard (Michelle Pfeiffer), rules over a small group that includes her rebellious daughter, Carolyn Stoddard (Chloë Grace Moretz), and troubled, precocious nephew, David Collins (Gulliver McGrath). They need Barnabas’ help, and so he begins to revive the family fortune and the family home, but an old enemy is determined to destroy them all.

Dark Shadows is a Johnny Depp movie, as directed by Tim Burton, and Depp is brilliant as always. I couldn’t get enough of his Barnabas Collins, and neither could the screenplay. This movie is so much about Barnabas that the other characters are left in Depp/Barnabas’s considerable wake. First of all, some of the supporting characters are extraneous, like young Miss Grace’s Carolyn Stoddard and Helena Bonham Carter’s Dr. Julia Hoffman; the good doctor provides some nice comic relief, which is good, because the character is otherwise useless. Some like, Pfeiffer’s Elizabeth and young Mr. McGrath’s David, are under-utilized. Everything about the witch Angelique Bouchard is forced, and so is much of Eva Green’s performance as her.

Still, this is Depp’s show, and he creates a Barnabas that is so cool, you’ll want to be his friend (in spite of the inherent danger of being pals with a vampire). In a career full of idiosyncratic characters, Barnabas is Depp’s most endearing oddball.

Back in the late 1980s and early 1990s, I often came across articles about Depp or director Tim Burton that described either man as quirky. Dark Shadows is quirky and also campy. It spoofs the melodrama of soap operas, and Depp’s droll, tongue-firmly-in-cheek comedy gives this sometimes awkward film a lot of humor and laughs, which it needs. Like all of Burton’s films, Dark Shadows has excellent production values, especially the costumes and set and art decoration. However, Dark Shadows is not only quirky, but also odd in its quality. It is partially a good Burton-Depp movie, but the rest of it is a misfire because of the poor screenwriting. The acting and directing cannot, try as they might, change that.